Video revives memories of "Jihadi John," another British ISIS member who appeared in several videos in which hostages were murdered before he himself was believed to have been killed. 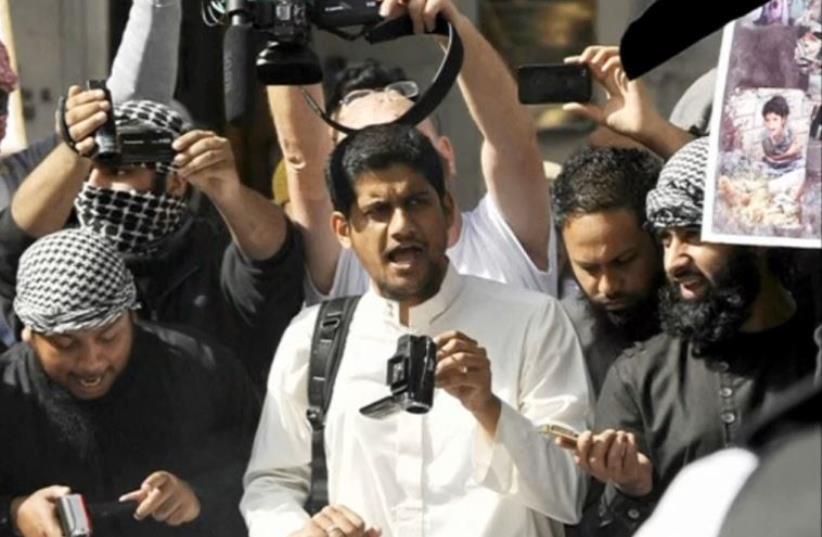 A file photograph shows a man identified by British media as Siddharta Dhar taking part in a demonstration outside the US embassy in London
(photo credit: SCREENSHOT/REUTERS)
Advertisement
LONDON - The masked militant in an Islamic State video showing the killing of five men accused by the group of being Western spies is believed to be a Londoner known as Sid who once sold inflatable bouncers.Siddhartha Dhar, who left Britain for Syria while on police bail after his arrest on suspicion of belonging to a banned group and encouraging terrorism, has been identified by media as the spokesman in the militant organization's latest film.The video also features a young boy wearing a black bandanna around his head and army-style camouflage clothing, threatening in English to "kill the kaffir (unbelievers) over there."Sunday Dare, a Londoner of Nigerian origin, identified the child as his four-year-old grandson Isa. Dare told British media his daughter, who grew up a devout Christian named Grace before converting to Islam and changing her name to Khadijah, had taken London-born Isa to Syria with her to join Islamic State.The video revived memories of "Jihadi John," another British IS member who appeared in several videos in which hostages were murdered before he himself was believed to have been killed in an air strike late last year.Dhar, who is also known as Abu Rumaysah, is one of Britain's most high-profile Islamists and an associate of Anjem Choudary, Britain's best-known Islamist preacher who is due to go on trial next week accused of terrorism offenses.A convert from Hinduism who lived in east London, Dhar regularly attended protests staged by the now banned organization al-Muhajiroun and had often spoken to the media in support of radical Islamic causes.Since leaving Britain he gained further attention through online videos in which he exhorted life under Islamic State.