Television footage showed bodies lying beneath trees outside the building in the mostly Kurdish town in southeastern Turkey. 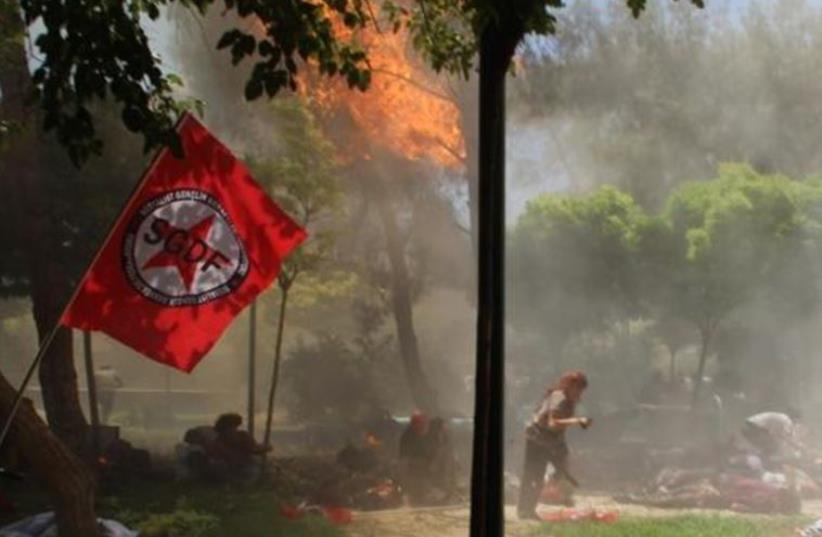 This photo taken on July 20, 2015 shows the scene after an explosion in the town of Suruc in Sanliurfa, on July 20, 2015, not far from the Syrian border.
(photo credit: AFP PHOTO)
Advertisement
An explosion outside a cultural center in the Turkish town of Suruc near the border with Syria killed at least 27 people and wounded many more on Monday, in what senior officials said may have been a suicide bombing by Islamic State militants.Television footage showed bodies lying beneath trees outside the building in the mostly Kurdish town in southeastern Turkey, some 10 km (6 miles) from the Syrian town of Kobani, where Kurdish fighters have been battling Islamic State."Our initial evidence shows that this was a suicide attack by Islamic State," one senior official in Ankara told Reuters.
Amature video capturing moment of Turkish blast
A second official also said Islamic State appeared to have been responsible and that the attack was a "retaliation for the Turkish government's efforts to fight terrorism."WARNING: GRAPHIC VIDEONATO member Turkey's interior ministry said 27 people were killed and around 100 wounded. The death toll could rise."I saw more than 20 bodies. I think the number of wounded is more than 50. They are still being put into ambulances," one witness told Reuters by telephone, giving his name as Mehmet. "It was a huge explosion, we all shook."The explosion comes weeks after Turkey deployed additional troops and equipment along parts of its border with Syria, concerned about the risk of spillover as fighting between Kurdish forces, rebel groups, Syrian government troops and Islamic State militants intensifies.Turkey's leaders have said they do not plan any unilateral military incursion into Syria but have also said they will do whatever necessary to defend the country's borders.Ankara fears any disorder in the border area could re-ignite an armed Kurdish separatist rebellion that has killed some 40,000 since 1984. It would also concern Western allies who seek greater controls on a porous frontier that serves as a frontline in the battle against Islamic StatePervin Buldan, a senior lawmaker from Turkey's pro-Kurdish HDP opposition party, said local officials were investigating the possibility that the explosion was a suicide bombing.The Hurriyet newspaper said on its website that the suicide bomber was an 18-year old woman, but there was no independent confirmation of this.REBUILDING KOBANIBuldan said the blast happened as Turkish and Kurdish youths gathered at the cultural center ahead of a planned trip to Kobani, which was secured by Syrian Kurdish fighters last month after an assault by Islamic State.Kobani was the site of one of the biggest battles against Islamic State last year. Syrian Kurdish forces, known as the YPG, drove the Islamic militants back from the town with the help of US air strikes, after months of fighting and siege.Turkey's Kurds were enraged at the time by Ankara's refusal to intervene to stop the Islamic State siege."Turkish and Kurdish youth had come to cross into Kobani, and there were three or four days of activities planned," Buldan told Reuters, adding that HDP lawmakers were on their way to the scene.The group - the Federation of Socialist Youth Associations - had been planning a trip to Kobani to build a library, plant a forest and build a playground in the town, Fatma Edemen, a member of the group wounded in the blast, told Reuters."We defended it together and we will rebuild it together," read one of its banners at the scene.Sources in Prime Minister Ahmet Davutoglu's office said he had ordered Deputy Prime Minister Numan Kurtulmus, as well as the interior and labor ministers, to go to Suruc.A video posted on Facebook by one of the group of youth activists showed at least 20 people lying on the ground, some still alive. People milled about trying to comfort the wounded, as others cried out. Smoke and dust rose from the ground.A hospital source made an urgent request for blood donations."Ambulances and private cars are picking up the wounded...I am going to the hospital to help out," Adham Basho, a local politician, told Reuters by telephone as sirens wailed in the background.