Analysis: Are France and the EU serious about combating jihadism?

Scores of military experts believe ground troops are a sine qua non of winning the war against Islamic State in the Syrian and Iraqi theaters. 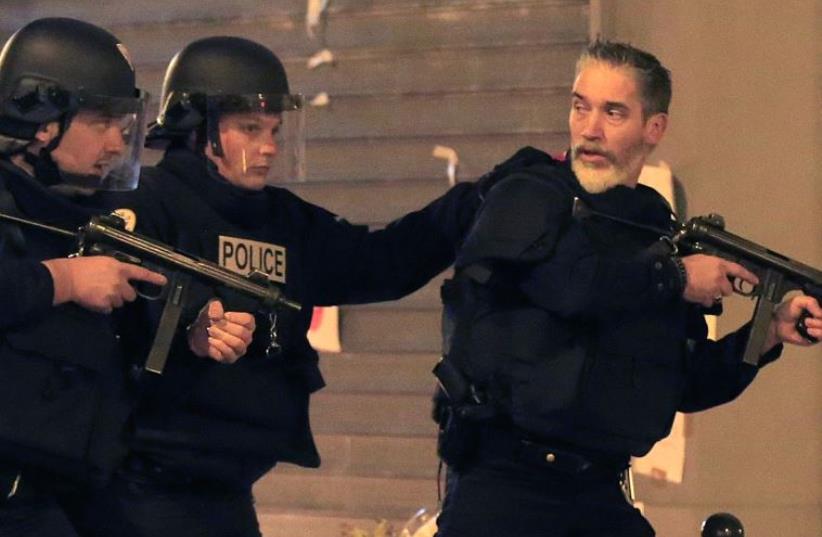 French Police in action following a series of deadly attacks in Paris
(photo credit: REUTERS)
Advertisement
France’s Socialist President Francois Hollande declared on Friday that he will leave no stone unturned in his country’s response to Islamic State’s massacre of 130 people in Paris. Are Hollande and his European allies serious about the business of eliminating the jihadist movement? “To all of you, I solemnly promise that France will do everything to destroy the army of fanatics that committed these crimes,” Hollande said at a memorial to the victims attended by some of the wounded along with family members.Hollande’s stated aim: to destroy “the army of fanatics.” His rhetoric suggests a new form of hawkish socialist anti-jihadism.
As the dust settles in Paris, is it time for a ground offensive against ISIS?
While Hollande made a whirlwind tour to enlist support from the Americans and the Russians to mount a broad-based coalition against Islamic State, he still is fighting with one arm behind his back.“France will not intervene militarily on the ground,” said the French president on Tuesday in Washington.Scores of military experts believe ground troops are a sine qua non of winning the war against Islamic State in the Syrian and Iraqi theaters.Europe, parts of which still suffer from high-intensity Bush Derangement Syndrome, could find some wisdom in a core feature of George W. Bush’s foreign policy doctrine, namely, “Take the fight to the enemy overseas before they can attack us again here at home.”To be fair, Hollande has launched an air campaign against Islamic State targets. His government plans to increase the military budget by 600 million euros.Hollande, however, has not seized the opportunity to mobilize his army, the largest in Western Europe.The New York Times reported Friday on an unprecedented surge in French military enlistment after the November 13 Paris attacks.Col. Eric de Lapresle, a spokesman for the French Army, said, “I’ve never seen anything like it. People are coming in and contacting us in droves through social media, using words like liberty, defense and the fight against terrorism.”It is odd that at precisely the moment France has the kind of revolutionary discipline among its citizens to knock out the jihadists, Hollande rapidly retreats.One can understand Hollande’s frustration. He turned to German Chancellor Angela Merkel’s administration on Wednesday for military help. “Knowing the rules that exist in Germany in terms of external intervention, if Germany can go further, it would be a very good signal in the fight against terrorism,” said Hollande.Germany issued a soggy expression of solidarity. The economic engine of Europe will provide a frigate and Tornado surveillance planes and might offer airborne refueling.As reports surfaced on Saturday that a German arms dealer had provided weapons to the Paris terrorists, one might expect Germany to inject its military into Syria/Iraq.On their domestic fronts, France and Germany are confronted with widening Sunni and Shi’ite radical Islamist structures.French Interior Minister Bernard Cazeneuve said there are already 899 radical mosques and 41 additional mosques are being radicalized.There are 7,900 radical Salafists in Germany, a reservoir of recruitment for Islamic State. The actual number is probably closer to 10,000.Shi’ite-animated jihadism is not limited to the Middle East, where Hezbollah and Iran have enabled the Syrian regime to execute a war on its own people with over 250,000 dead.Germany, like France, has also fought its rising homegrown jihadism with one hand behind its back.There are an estimated 950 Hezbollah members in Germany. Merkel, like Hollande, refuses to outlaw Hezbollah’s political networks.Hollande’s commitment to knock out “the army of fanatics” could be extended to Hezbollah.The convicted Hezbollah terrorist Hossam Taleb Yaacoub used Lyon, France to hold meetings with his handlers to organize an attack against Israelis in Cyprus in 2012.Hezbollah terrorists blew up an Israeli bus in Bulgaria in the same year, killing five Israelis and one EU citizen, a Muslim Bulgarian bus driver.It is an open secret that France and Germany cut a deal with Hezbollah to allow the Lebanese militia to operate within their borders in exchange for no terrorist attacks.The policy is incurably cynical and dangerous, according to critics, because Hezbollah has used France and Germany to raise funds for its terrorist activities. Hezbollah’s presence in Europe helps to create an environment of lethal anti-Semitism and anti-Western ideology.The lack of sophisticated entrapment procedures and American-style anti-terrorist finance policies does not bode well for Hollande’s declared war on Islamic State. The absence of a full-throttle counter-terrorism strategy might mean France and Europe will have to brace for more jihadism.The writer is a fellow of the Foundation for Defense of Democracies.