Analysis: Why is Iraq’s offensive to reclaim Hawija from ISIS important?

A closer look at the battle revolving one of the last pockets of ISIS-controlled territories in Iraq.

ISIS fighters stand guard at a checkpoint in the northern Iraq city of Mosul.
(photo credit: REUTERS)
Advertisement
In the early morning hours of September 21, the Iraqi army began operations to retake Hawija from Islamic State. Prime Minister Haider al-Abadi announced the operation in the morning, as has been his custom for major operations such as Mosul over the last year. Photos posted on Twitter showed him meeting with the key elements of the operation, the Iraqi army, the Federal Police and the Hashd al-Shaabi or 'Popular Mobilization Units,' a group of Shia militias.The operation to liberate Hawija is more than just a battle to retake a city 300 km north of Baghdad. Hawija, which is around 100km long by 20km wide, is the capital of one of the last pockets of ISIS-controlled territories in Iraq. After Mosul was liberated in July and Tal Afar in August, Hawija became the capital of ISIS in Iraq. It is only 65 km west of Kirkuk, a city run by the Kurdistan Regional Government, which is at the heart of a controversy between Baghdad and the Kurds over a referendum planned for September 25.Baghdad, the Kurds and the US-led coalition fighting ISIS all planned for the liberation of Hawija without taking into account fully its implications on the referendum. The White House and State Department have opposed the Kurdish independence referendum and sought to show it could distract from the war against ISIS. US Special Presidential Envoy Brett McGurk was in the Kurdish regional capital of Erbil on September 14 to discuss the Hawija operation. He described cooperation between the Peshmerga and Iraqi army as “very strong”  and that it was “important that we remain united and focused on the effort to defeat Daesh.” He also said the battle in Hawija would be very difficult.To defeat ISIS in Hawija, the coalition’s Combined Joint Task Force, Operation Inherent Resolve, launched 55 airstrikes since the beginning of the month, according to daily strike reports they have released. They destroyed 19 suicide vehicles, called VBIEDs, eight local ISIS headquarters and five fighting positions. The coalition operation was directed at “shaping the battlefield” to prepare it for the decisive strike by the Iraqis on September 21.Hawija has been a center of jihadist attacks since 2003. It was originally a town loyal to the Ba’ath party of Saddam Hussein. It is only an hour's drive from his hometown of TIkrit. Before the arrival of ISIS, it was also a center of opposition to Nouri al-Maliki’s Iraqi government, which many of the local Sunni Arab tribes viewed as an Iranian-backed Shia sectarian government.
Retaking Mosul from ISIS (credit: SETH J. FRANTZMAN) 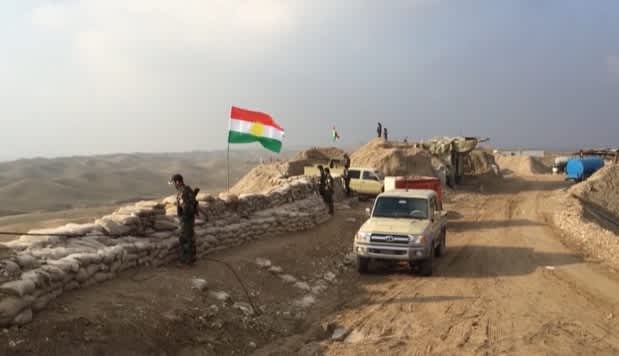 Kurdish Peshmerga overlooking the road to Hawija in 2015.The presence of Shia militias in the Iraqi forces assaulting Hawija will only encourage feelings among locals that this is still a sectarian war. However, many in Hawija have suffered under three years of ISIS rule that has seen mass executions and kidnapping of local families.Peshmerga who man positions to the east of Hawija were initially supposed to take part in the operation. But their participation is now thrown into doubt by the opposition of Baghdad and the coalition to the referendum. The central government in Baghdad tried to remove Kirkuk’s governor Najmiddin Karim on September 14 because of Karim’s support of the Kurdish referendum. Launching a major offensive just days before the referendum could distract from the vote.
There is also potential for conflict between the Peshmerga and Shia militias, as there has been in the past south of Kirkuk in Tuz Khurmatu and Khanaquin. The Peshmerga and the special forces around Kirkuk such as groups like Task Force Black and the local S.W.A.T units will be on high alert against ISIS attacks.As the battle moves forward in Hawija its affects on the referendum will increase. This also depends on how quickly the several thousand ISIS fighters are defeated. If it goes quickly, as in Tal Afar, that will ease the controversy of the referendum. If it does not, it could exacerbate tensions. There will be up to 100,000 IDPs to deal with and many other plausible issues.