As Brussels gains sympathy after attacks, Turks wonder: What about us?

Turkish President Tayyip Erdogan condemned the attacks in Brussels that killed at least 30 people on Tuesday and said there was no difference between terror organizations. 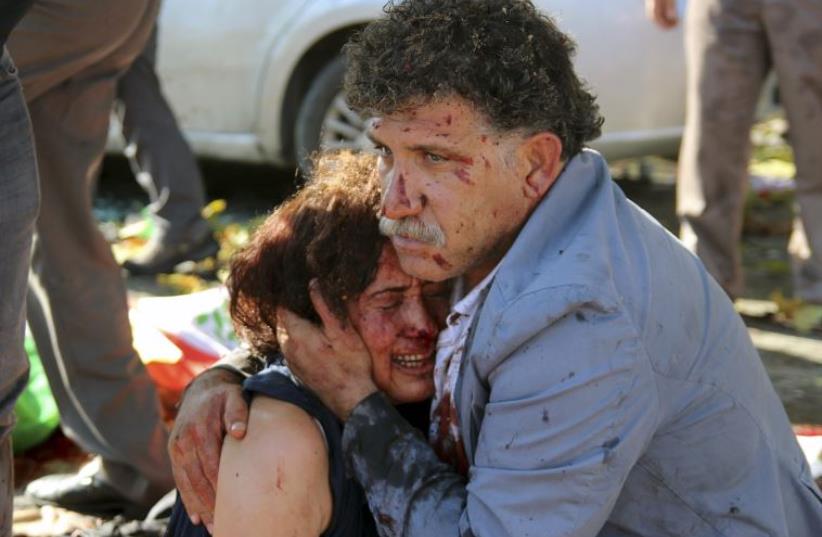 An injured man hugs an injured woman after an explosion during a peace march in Ankara, Turkey, October 10, 2015.
(photo credit: REUTERS)
Advertisement
Just as happened following the terrorist attacks in Paris on New Year’s Day of this year and January of last year, the Brussels atrocities this past Tuesday evoked streams of sympathy and solidarity with the people of Belgium on social media.Yet the outpouring of emotion in the wake of the Brussels bombings has Turks on social media wondering why there was no similar display of solidarity following the gruesome attacks that have rocked Ankara and Istanbul in recent months.Turkish President Tayyip Erdogan condemned the attacks in Brussels that killed at least 30 people on Tuesday and said there was no difference between terror organizations, whether they were Kurdish militants targeting Ankara or the attackers in the Belgian capital."The heinous attacks in Brussels have reiterated that terror cannot be a method of struggle for freedom, and once again underlined the need for common struggle against all types of terror," Erdogan said in a written statement.Erdogan, said on Monday that his country would use all its military and intelligence might to battle "one of the biggest and bloodiest terrorist waves in its history," after a suicide bomber killed three Israelis and an Iranian in Istanbul."Since last July, the PKK on the one side and many terrorist organizations which have decided to act with it such as Daesh (commonly used Arabic name for Islamic State) which has no humanitarian and moral values, have been targeting our country with their attacks," Erdogan said in a speech in Istanbul. "I believe we will soon see results against the new methods of terrorism by developing new methods to battle it," he added.The attack last Saturday on Istiklal Street, a long pedestrian avenue lined with international stores and foreign consulates, was the fourth suicide bombing in Turkey this year. The two in Istanbul have been blamed on Islamic State, while the two others in the capital Ankara have been claimed by Kurdish militants. The attacks have raised questions at home and among NATO allies as to whether its security services are overstretched as they fight on two fronts. Erdogan's critics, including privately some of Turkey's allies, argue that his focus on battling militants from the Kurdistan Workers Party (PKK) in the largely Kurdish southeast - a campaign he has repeatedly vowed will continue - comes at the expense of the fight against Islamic State in Syria and Iraq.A French cartoonist for the prestigious daily newspaper Le Monde published a moving cartoon earlier this week showing two characters in the colors of the French and Belgian flags in tears – with the French figure consoling the Belgian.The cartoon notes the dates of the Brussels attacks as well as the date of the assault on Paris that killed scores of innocent people.

In response to the cartoon, Turkish social media users circulated the same image, only this time with an additional character bearing the colors of the flag of Turkey. Underneath the image are the dates on which terrorist attacks were carried out in Ankara and Istanbul.