US-led coalition forces, Syrian rebels, and the Syrian military have slowly re-taken many of ISIS's strongholds over the last several months. 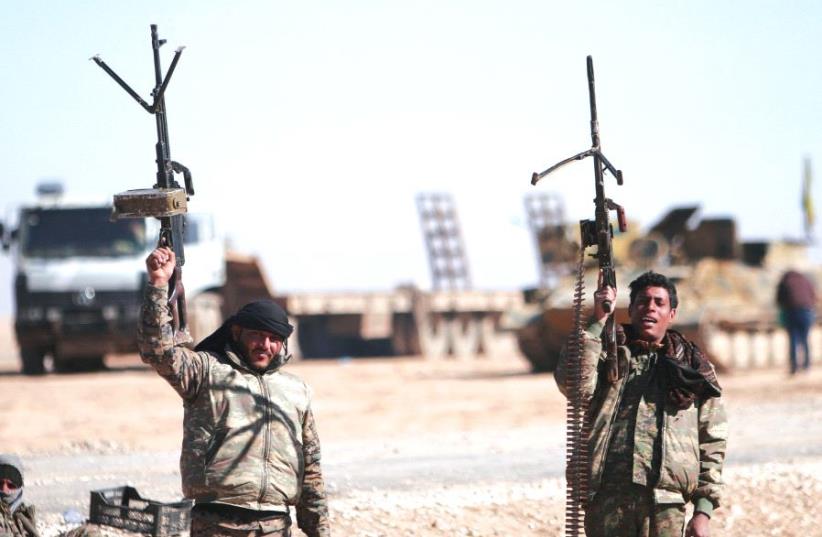 SYRIAN DEMOCRATIC Forces fighters hold up their weapons north of Raqqa city.
(photo credit: REUTERS)
Advertisement
Islamic State’s Syrian capital of Raqqa has been largely conquered by the Syrian Democratic Forces supported by the US-led coalition. Around 100 ISIS fighters surrendered on Saturday, and 1,500 civilians have fled unharmed in the last week, coalition spokesman US Army Col. Ryan Dillon said.The battle for Raqqa began in early June and has dragged on for more than four months.By late June ISIS was surrounded in the city, its forces occupying about 3 square kilometers. By mid-September it had been pushed back to a small pocket in the center and north of the city.Nevertheless the SDF, which is composed of forces including the Kurdish People’s Protection Units (YPG), continued to face a difficult enemy.Adnan Abu Amjad, a wellknown commander of the SDF’s Manbij Military Council, was killed fighting in the city on August 29. ISIS counterattacks also inflicted casualties. On October 4, Jac Holmes, a British volunteer serving with the People’s Protection Units (YPG), estimated it could still take up to two months to take the city, when he held a live Facebook session to answer questions about the battle.Dillon told Reuters on Saturday that “we still expect difficult fighting in the days ahead.”Since October 5, the coalition has carried out almost 150 air strikes in and around Raqqa, according to its daily press releases. Most strikes in recent days targeted ISIS “fighting positions,” but the coalition does not specify precisely where. The congested space in the jihadist-held part of the city, about a kilometer square, make air strikes difficult.What gives hope to the coalition and SDF is the surrender of 100 ISIS fighters in the last days.There is no agreement for the exit of ISIS from the city, Wladimir van Wilgenburg, a Kurdish affairs analyst in Syria, wrote on Twitter that SDF commander Rojda Felat told him on Thursday.However, the SDF and coalition have been attempting to let civilians flee. “Daesh [ISIS] is on the verge of being finished.Today or tomorrow the city may be liberated,” Nouri Mahmoud, a spokesman for the YPG, told Reuters on Saturday.When Raqqa falls it will be largely symbolic, because there are not thought to be major ISIS leaders in the city which once served as the capital of the black flag-waving extremists. However, the long battle has been a major but costly victory for the SDF and is part of the successful policy the US has hit upon of leveraging local forces to defeat ISIS.The battle for Raqqa has been eclipsed now by the race for the Iraqi border taking place 160 km. down the Euphrates River, as the SDF and the Assad regime seek to fill the space left by ISIS retreating. In the long run the issue of who gets to the Iraqi border and whether the US chooses to challenge Iranian influence and stick with its local allies, will be more important than the fall of Raqqa.