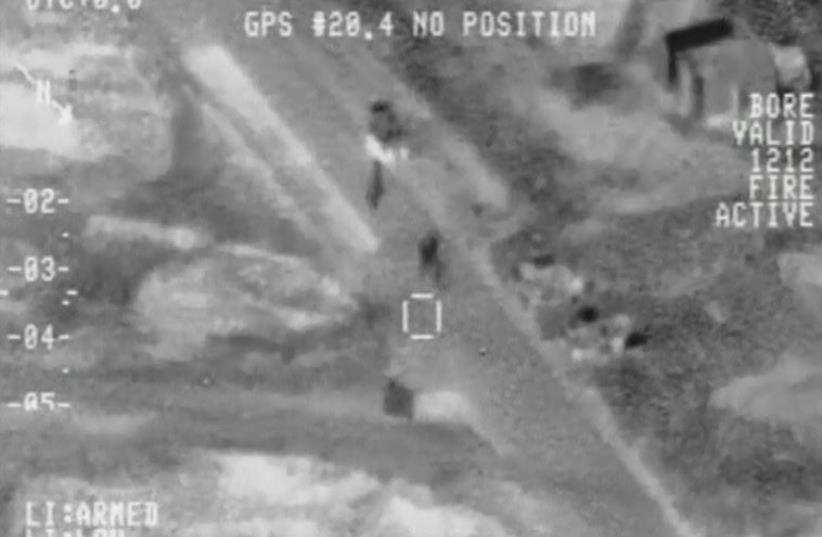 Air strikes against Islamic State.
(photo credit: REUTERS)
Advertisement
The French military released on Sunday footage showing its first air strikes in Syria, which it says destroyed an Islamic State training camp in the east of the country to prevent the group from carrying out attacks against France's interests and to protect Syrian civilians.France had until now only struck Islamic State targets in neighboring Iraq, carrying out just 3 percent of air strikes in an offensive on the group by a US-led coalition.It has also provided limited logistical support to Syrian rebels it considers moderate, including Kurds.The French military communications department, ECPAD, said that the mission involved five Rafale fighter jets, one Atlantique 2 and a C-135 refueling aircraft.The strikes were carried out based on intelligence gleaned from 12 reconnaissance missions since September 8, the ECPAD said, and targeted a camp south of Deir al-Zor.The attack lasted approximately five hours.More operations could take place in coming weeks to protect France and Syrian civilians, French President Francois Hollande told reporters on the sidelines of the United Nations General Assembly in New York.The US is leading two different coalitions carrying out air strikes in Iraq and Syria, but Hollande repeated that for the moment Paris would make its decisions to strike in Syria independently, albeit in co-ordination with Washington.France was ready to join air strikes on military installations in Syria in 2013 in response to a massive chemical weapon attack before US President Barack Obama turned against it after Syrian President Bashar al-Assad agreed to abandon his chemical arsenal.France had feared strikes in Syria could be counter-productive and could strengthen Assad, who has been fighting a rebellion against his rule since 2011.However, it has been shaken by a series of deadly attacks by Islamist militants this year, including the killing of 12 people at the office of the satirical weekly Charlie Hebdo in January.In addition, Paris has become alarmed by Islamic State gains in northern Syria and the possibility of France being sidelined in negotiations to reach a political solution in Syria.