France says taking all refugees would be victory for ISIS

About 60 countries, including ministers from Iraq, Jordan, Turkey and Lebanon, meet in Paris to cement measures aimed at easing the return of refugees. 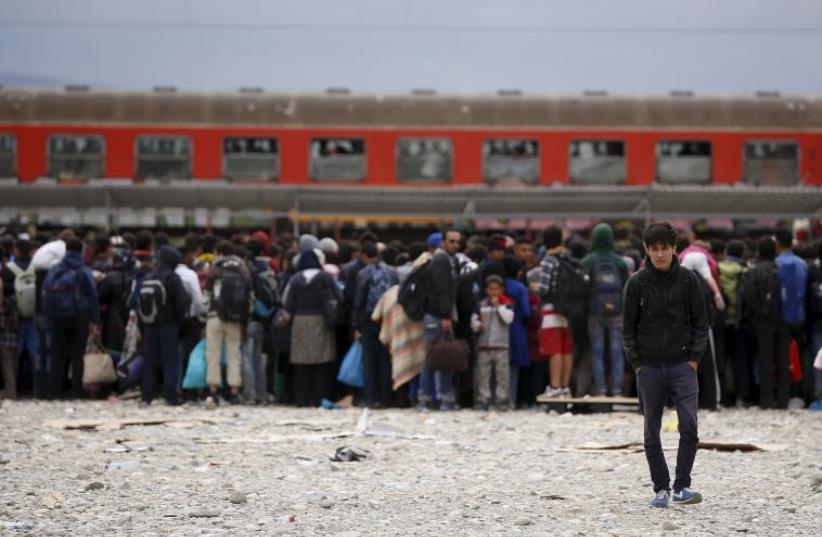 DATE IMPORTED: September 08, 2015 Migrants wait to board a train after crossing the Macedonian-Greek border near Gevgelija, Macedonia, September 8, 2015.
(photo credit: REUTERS)
Advertisement
PARIS - France warned on Tuesday that it would be a mistake for Europe to take in all refugees persecuted by Islamic State militants in Syria and Iraq, and called for a plan of action to ensure the Middle East's diversity remained despite the mounting crisis.About 60 countries, including ministers from Iraq, Jordan, Turkey and Lebanon, met in Paris on Tuesday to cement measures aimed at easing the return of refugees, encouraging regional governments to bring minorities into the political fold and ensure no impunity for crimes against humanity.
Holocaust refugee: We owe it to mankind to allow Syrian refugees into Britain
"It's very difficult, but if all these refugees come to Europe or elsewhere, then Daesh has won the game," French Foreign Minister Laurent Fabius told RTL radio, referring to the Arabic acronym for Islamic State."The objective (of this conference) is that the Middle East remains the Middle East, that means a region of diversity where there are Christians, Yazidis, etc," he said.According to French diplomats, the conference should also see financial pledges that could be used to improve the situation of refugees in neighboring states, ranging from reconstruction of infrastructure to restoring basic services or training local police.
Syrian refugees arrive in Europe
"There is a humanitarian urgency," President Francois Hollande said at the opening of the conference."If we do not offer more help to the countries that welcome (refugees), if we do not give more support to the families that are in these refugee camps or are displaced in neighboring countries, then not only will there be tragedies ... but there will be this exodus."Hollande said on Monday Paris would begin reconnaissance flights over Syria with a view to launching air strikes against Islamic State. France also plans to welcome some 24,000 Syrian refugees from camps in the Middle East over the next two years.