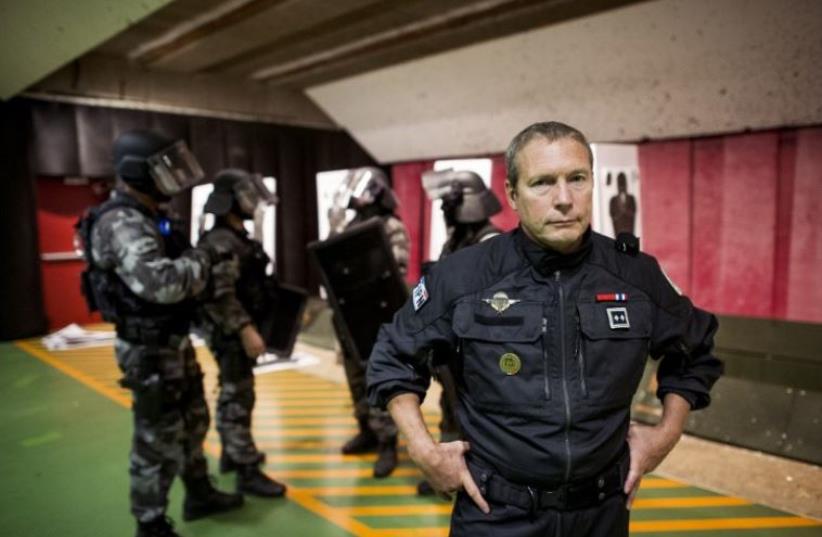 Jean Michel Fauvergue, head of the RAID special police forces unit, poses in Bievres, outside of Paris
(photo credit: AFP PHOTO)
Advertisement
Jean-Michel Fauvergue, the commander of the RAID special police forces unit which carried out the raid in the Paris suburb of Saint Denis on Wednesday, said that many of the methods used by his charges were learned from their Israeli counterpart.In an interview with the French-language daily Le Figaro, Fauvergue said that the operation, which resulted in the deaths of two terrorists and the arrest of five others, took seven hours. It included the exchange of heavy gunfire, dozens of stun grenades, and the deployment of unmanned aerial vehicles and robots.According to other reports, the operation required close to 100 officers who shot 5,000 rounds of live fire. The commander said he told the officers that the apartment which they raided was housing three people - two men and one young woman who ended up blowing herself up during the raid.Fauvergue said that French authorities received an intelligence tip from foreign spy services regarding the whereabouts of the mastermind of last week's Paris atrocities, Abu Abdelhamid Abaaoud. He said that the bodies found in the apartment could not be immediately identified.The RAID commander said that his forces lost the element of surprise when their initial plan - which was to blow up the front door - did not succeed. The terrorists holed up in the apartment managed to reinforce the door.Once it was known that the special forces were staging a raid, the terrorists opened fire and hurled grenades at the officers. In response, the RAID team sent an attack dog into the apartment, but the terrorists shot it dead.Soon after, a sniper who was positioned in advance spotted one of the apartment's inhabitants. When he demanded that the suspect raise his hands in the air, the suspect refused. At this point, the sniper opened fire and shot him.During the exchange of gunfire, the female terrorist blew herself up. Fauvergue said that the force of the blast sent body parts and shards of glass onto the street. Since the team of commandos kept an adequate distance from the terrorists, she failed to inflict any casualties."She detonated her explosives while she was alone in the apartment, perhaps in the hope that the explosion would reach us, but it did not happen," he told Le Figaro. "Nonetheless, the explosion did damage the supporting walls in the apartment."At around 9:00 a.m., Fauvergue said that his team noticed that the gunfire was coming from one gunman. The forces sent a drone and two robots into the apartment in order to get an idea of what was taking place there, but to limited success. The forces then used small cameras which they poked through the holes on the floor. Aside from the body of the terrorist, which was not identifiable, the team noticed there were two other suspects hiding in the apartment.The commander said that terrorists who carry explosives on their bodies "pose a problem" for his forces."We've already changed our methods," he said. "We have learned from the experiences of our friends as far as techniques used in places like Israel, but also in other countries. These are methods that are aimed at bringing about minimum damage from the explosion.""This is certainly a challenge for our soldiers and commanders," he said. "When you are commanding a force, you have to ask your troops to engage people who are willing to kill themselves. But we will continue to abide by regulations. We will continue to act in order to bring security and calm to our citizens."