French prime minister: Nations are waking up to need to fight radical Islam

French-Israeli MP Meyer Habib calls for free world to ‘put an end to jihad, once and for all’ 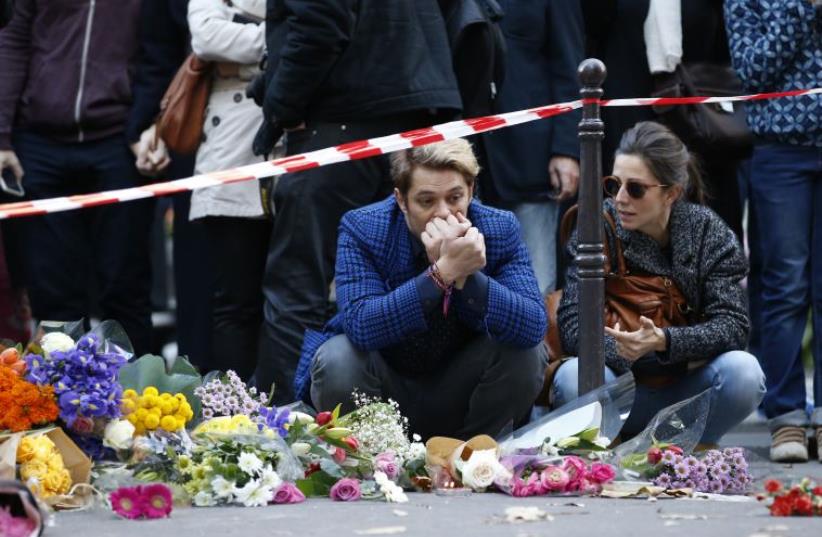 Mourners gather at memorial sites outside of the Casa Nostra restaurant and the cafe "Bonne biere" in Paris, on November 15, 2015, following a series of coordinated attacks in and around Paris on November 13
(photo credit: PATRICK KOVARIK / AFP)
Advertisement
France is meeting with countries around the world to form a coalition against terrorism, French Prime Minister Manuel Valls told the French National Assembly on Wednesday.Responding to a question by MP Meyer Habib, a French-Israeli who represents French citizens abroad in Israel and other countries, Valls said it is a “French tradition to fight jihad and radical Islam in every way possible.“Terrorism has struck countries in the region; Israel, of course, but also other countries in the Middle East. The first victims of terrorism are the Muslims themselves. Therefore, we have to fight terrorism in the name of universal values,” Valls stated, recalling that his country sent troops to Mali to fight terrorists who threatened to take it over.In order to fight terrorism, Valls explained, France needs a strong international standing.“There is a significant change that, unfortunately, came from the events of November 13.Today, the international community is waking up. Europe, Russia, which was directly harmed by a Daesh attack, and the US, of course, which is at the head of the coalition – we are working with them closely,” he said.Valls said French President Francois Hollande planned to meet with US President Barack Obama and Russian President Vladimir Putin in the coming week “to build a coalition against terrorism.”The French prime minister added that the fight against terrorism “is not to start a religious war, but to fight in the name of universal values of peace, democracy and mutual responsibility between men and women.”Habib said ahead of Valls’ response that France must be efficient and transparent in its response to terrorism.“After mourning, we must learn lessons and understand why this happened and what did not work properly,” he stated.Habib pointed out that while Islamic State and “its barbaric fighters who slaughter, crucify and rape” is France’s enemy, they are another branch of a jihadism that existed before them.“In 1986, Hezbollah murdered on Rennes Street [in Paris] after killing 58 of our paratroopers in Beirut,” Habib recounted. “After that, there was the Armed Islamic Group of Algeria [that attacked in France] and then al-Qaida and September 11, and Boko Haram, the Nusra front and now Daesh.”“Enough jihad! Enough religious war!” he exclaimed.Habib called for the free world to “put an end to jihad, once and for all, Sunni and Shi’ite.”He said a global response was necessary to destroy the “cancer” that is killing innocent people around the world.According to Habib, radical Islam developed in France because of logistical support from Iran, Syria, Saudi Arabia and Qatar, and therefore, it would be a mistake to choose a side against Sunnis or Shi’ites, as opposed to radical Islam in general.“Can you promise that, as long as these countries are involved in terrorism, France will not promote treaties with them, like we have in the last 40 years in the Middle East?” he asked.Habib also called for France to use the upcoming climate conference to hold an emergency meeting on fighting radical Islam.