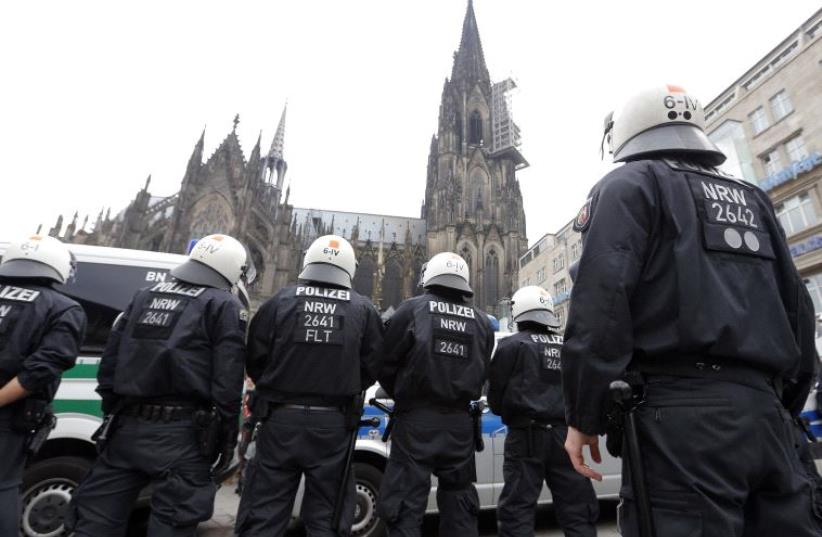 German riot police stand in front of the Cologne Cathedral
(photo credit: REUTERS)
Advertisement
German police said on Monday they had captured a man suspected of planning a bomb attack who had slipped through their grasp during a raid two days ago.Police had been looking for 22-year-old Syrian refugee Jaber Albakr since he evaded them during a raid on an apartment in the eastern city of Chemnitz, where they found several hundred grams of explosive."Tired but overjoyed: we captured the terror suspect last night in Leipzig," Saxony state police said on Twitter.Spiegel Online, without citing a source, reported that police captured Albakr after a tip-off from another Syrian living in Leipzig.Albakr approached the man at Leipzig railway station and asked if he could sleep at his home. The man agreed and later called police, who arrested Albakr at the home at 00:42 local time on Monday (2242 GMT on Sunday), Spiegel Online reported.Albakr had been in Germany since last year and was officially recognized as a refugee, police said at the weekend.A spokesman for the Federal Prosecutor's Office told broadcaster SWR on Sunday: "The overall picture of the investigation, in particular the amount of explosive found, suggests that the person was planning to carry out an Islamist-motivated attack."The suspicion that a refugee was planning a bomb attack will prove unwelcome news for Chancellor Angela Merkel, whose conservatives have lost support to the far-right Alternative for Germany (AfD) party over her open-door migration policy.Merkel, who said last month she wished she could "turn back the time by many, many years" to better prepare for last year's influx of almost 1 million migrants, has yet to say whether she will seek a fourth term as chancellor in elections next year.In July, the Islamic State militant group claimed responsibility for attacks on a train near Wuerzburg and at a music festival in Ansbach that wounded 20 people.