A report of the incident emerged just days after a number of "non-Iraqi" sex slaves were transported to Mosul under the direct orders of ISIS leader Abu Bakr al-Baghdadi. 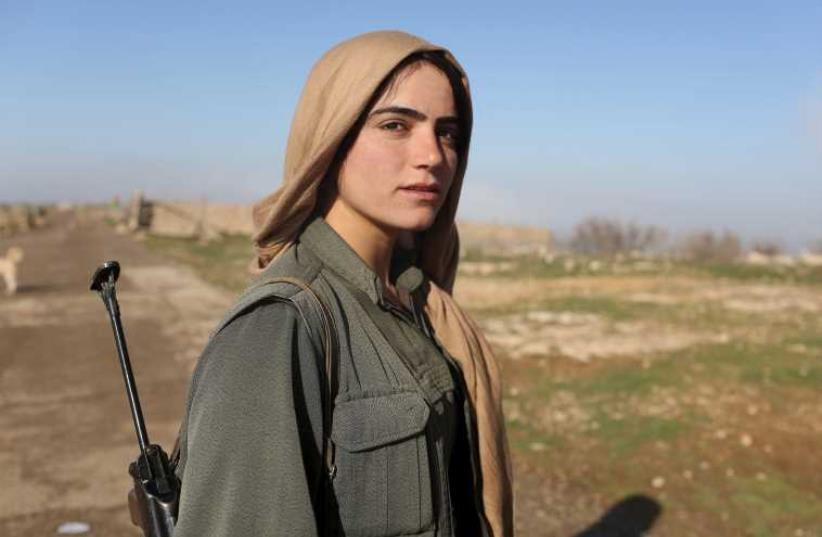 Kurdish Women Battle Islamic State.
(photo credit: REUTERS)
Advertisement
A senior Islamic State commander was shot and killed by an Iraqi woman whom he forced into sexy slavery three months after gifting her to several men under his command, independent Iraqi satellite TV network Alsumaria News reported Monday. Speaking with Alsumaria News, Kurdistan Democratic Party spokesman Saeed Mamouzini said that the ISIS commander, “Abu Anas,” was killed on Saturday near the city of Mosul.Mamouzini added that it was not clear what happened to the woman, said to be a member of the Yazidi-Kurdish minority, or how the extremist militant was killed.A report of the incident emerged just days after a number of "non-Iraqi" sex slaves were transported to Mosul under the direct orders of ISIS leader Abu Bakr al-Baghdadi, Alsumaria News added.  This is not the only instance in which female victims of ISIS have resisted against the terrorist organization. In August, ISIS gunmen executed 15 women for refusing to have sex with them, along with another 19 the month before for the same reason, a Kurdish official told Iraqi press. According to the UN, the Islamic State has established several sex slave outfits in Mosul since they took over Iraq's second largest city in 2014, consisting mostly of Yazidi, Christian and Shi'ite women, Alsumaria News added.