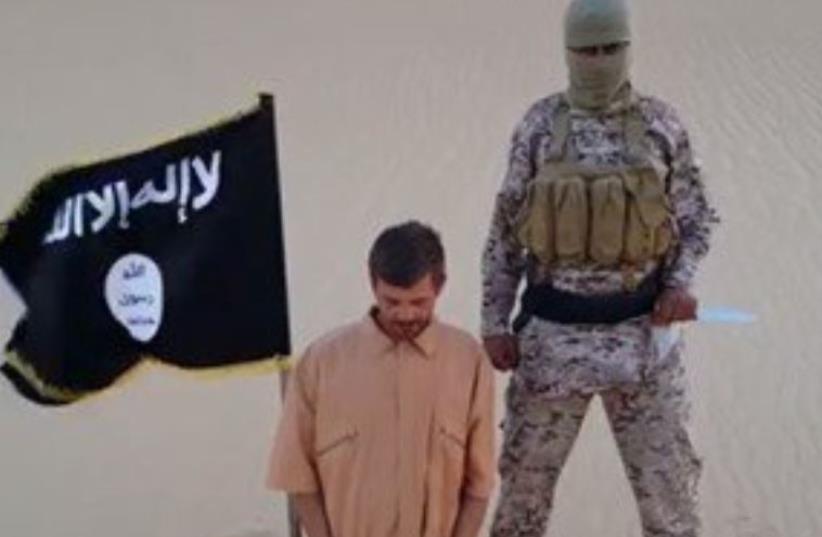 Croatian hostage in Sinai
(photo credit: ISLAMIC SOCIAL MEDIA)
Advertisement
CAIRO - Islamic State's Egyptian affiliate published a photograph it said was of the beheaded body of a Croatian hostage it had threatened to kill last week, the SITE monitoring service said on Wednesday.Reuters could not independently verify the authenticity of the picture, which carried a caption that said: "killing of the Croatian hostage, due to his country's participation in the war against Islamic State, after the deadline expired ... ".If confirmed, it would be the first beheading of a Western hostage held by Sinai Province, the Egyptian group which changed its name from Ansar Bayt al-Maqdis after it pledged allegiance to Islamic State.A spokesman at the Egyptian Interior Ministry's press office said: "We have seen this news on line but are currently making our own checks. If we confirm that it is indeed true, we will inform the media through a statement."The Croatian embassy said it was not authorized to comment and referred all queries to the Croatian foreign ministry. A spokeswoman for the ministry said she had no information. Croation Prime Minister Zoran Milanovic announced an extraordinary news conference for 5 p.m. (1500 GMT).The photograph, circulating on Twitter accounts of supporters of Sinai Province, shows a man's severed head lying on his body, with a knife driven into sand next to it and the black Islamic State flag in the background.Next to the picture, there are screenshots of Arabic language news articles with headlines saying: "Croatia confirms its support for Egypt in efforts to fight terrorism and extremism" and "Croatia affirms its continued support for the Kurdistan region."Last week, an online video purportedly from Sinai Province showed a man who identified himself as Tomislav Salopek who said the group would kill him in 48 hours if Muslim women in Egyptian jails were not freed.Ardiseis Egypt, a unit of French oil and gas geology company CGG, confirmed that the video showed one of its employees who was kidnapped on July 22 while traveling to Cairo.No immediate comment could be obtained from CGG.