The pictures show Islamic State members placing explosives in the ancient temple, then destroying it.

By REUTERS
AUGUST 25, 2015 14:58
ISIS documents destruction of ancient Roman temple in Syria
Advertisement
BEIRUT - Islamic State militants published photos on Tuesday purporting to show the destruction of a Roman-era temple in the central Syrian city of Palmyra, an act the UN cultural agency UNESCO has called a war crime.
The blast that destroyed the Roman-era temple of Baal Shamin in ancient city of Palmyra, Syria. (photo credit: ISLAMIC SOCIAL MEDIA)
Five photos were distributed on social media showing explosives being carried inside, being set around the walls of the temple, the large explosion and then rubble. 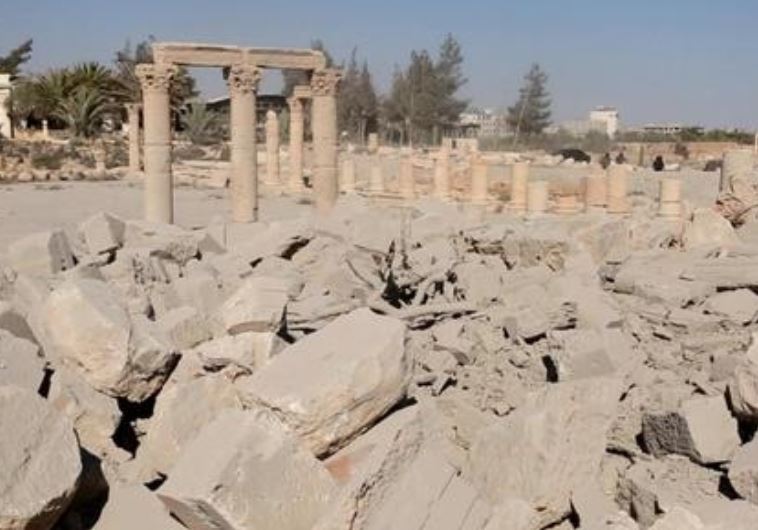 The ruins of the Roman-era temple of Baal Shamin in ancient city of Palmyra that ISIS militants destroyed. (photo credit: ISLAMIC SOCIAL MEDIA)
The militants blew up the temple of Baal Shamin on Sunday, according to the Syrian antiquities chief, but had not published visuals until now. Reuters could not independently verify the images.The temple was built nearly 2,000 years ago and UNESCO has described it as a symbol of Syria's historical cultural diversity, which it says Islamic State is seeking to obliterate. The temple bombing was be the first time the insurgents, who control swathes of Syria and Iraq and captured Palmyra in May, damaged monumental Roman-era ruins. 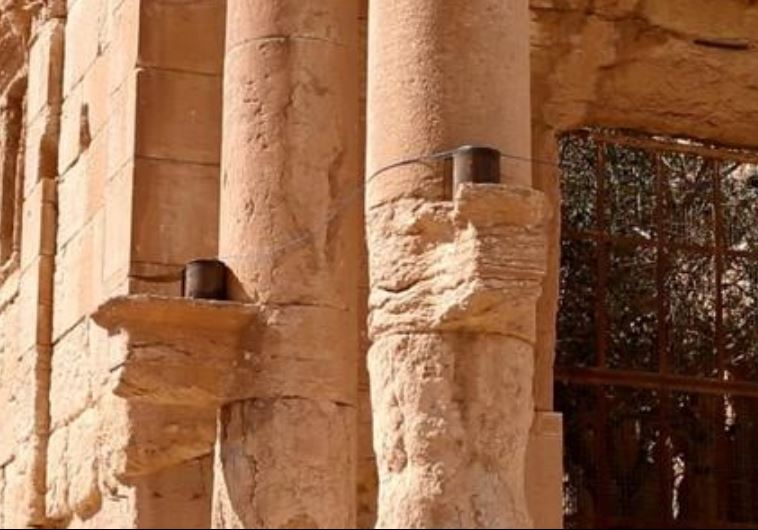 Explosives placed in the Roman-era temple of Baal Shamin in the ancient city of Palmyra. (photo credit: ISLAMIC SOCIAL MEDIA)
"We have said repeatedly the next phase would be one of terrorizing people and when they have time they will begin destroying temples," said Maamoun Abdul Karim, the country's antiquities chief to Reuters. "I am seeing Palmyra being destroyed in front of my eyes," he added. "God help us in the days to come."

ISIS militants carry explosives to blow up Roman-era temple of Baal Shamin in the ancient city of Palmyra. (photo credit: ISLAMIC SOCIAL MEDIA)
A week ago, the militants beheaded Khaled Asaad, an 82-year-old scholar who worked for more than 50 years as head of antiquities in Palmyra, after detaining and interrogating him for over a month.Before the city's capture by Islamic State, Syrian officials said they moved hundreds of ancient statues to safe locations out of concern that the militants would destroy them.In June, Islamic State blew up two ancient shrines in Palmyra that were not part of its Roman-era structures but which the militants regarded as pagan and sacrilegious.The militants were also beginning excavation for gold and giving licenses for illicit excavation of the city's treasures, Abdul Karim added.