ISIS vs. al-Qaida: Zawahiri says Baghdadi is not the leader of the Muslim world

"You spill blood and attack the Muslim people in order to rule." 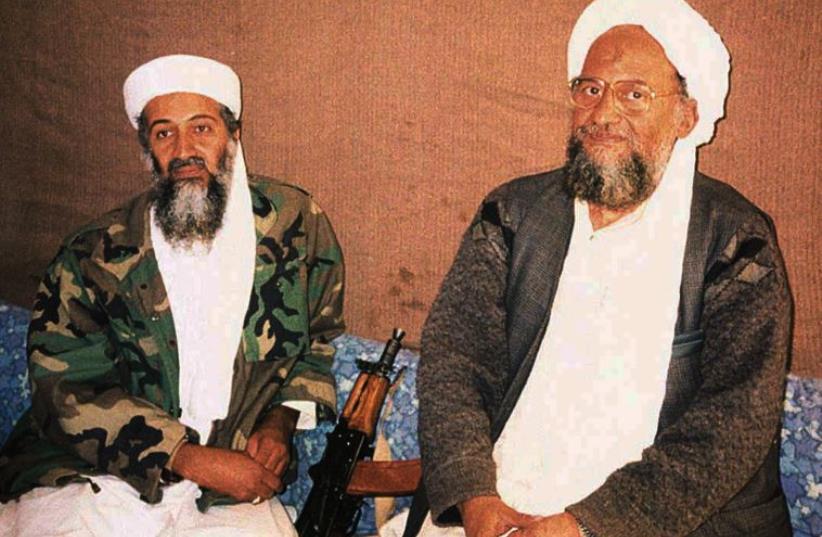 al-Qaida cheif Ayman al-Zawahiri sits with predecessor Osama Bin Laden during an interview in 2001
(photo credit: REUTERS)
Advertisement
A month after the leader of al-Qaida said that the Islamic State and its leader are illegitimate, a recording of Ayman Zawihri was released Monday, documenting an even harsher tirade against ISIS and the man who refers to himself as the Caliph of Islam, ISIS chief Abu Bakr al-Baghdadi."You spill blood and attack the Muslim people in order to rule," Zawihiri said in his fourth recorded lecture released as part of his "Islamic Spring" lessons. He added that, "Baghdadi's Caliphate is a Caliphate of explosions, damage and destruction."The bulk of the criticism dealt with the manner in which ISIS forces those under its rule to convert to Islam and succumb to the organization's rule. "Pledging allegiance by force, which some spiritual leaders have allowed, is not our way," he said.Despite the reports of ISIS gains made against other rebel groups in Syria, including the al-Qaida affiliated Nusra Front, Zawihiri claimed that "Baghdadi doesn't not rule over us. There are Mujahadin that control wider territories than ISIS," he said.The al-Qaida chief said that "the choosing of a Caliph can be done solely with the agreement of the Muslim people. Expropriating power forcefully and by the sword is a crime against Islamic doctrine." According to Zawahiri, Baghdadi, like he himself, swore allegiance to former Taliban leader Mullah Omar in Afghanistan - which he then violated. "The true Caliphate of Islam is in Afghanistan, under the leadership of Mullah Muhammad Omar." He added that "ISIS has violated the rules of jihad and has turned its fighters from people who want to get to heaven to people who go to hell."Last month as well, Zawihiri declared that he "does not recognize Baghdadi's claim to be Caliph," and said that the organizations attempts to define itself as the Caliphate are illegitimate, and do not have the loyalty of al-Qaida, "even though some spiritual leaders have allowed it."The al-Qaida leader called on Muslim scholars to warn the youth not to misunderstand Islam, like "the Salafist organizations who accuse other Muslim sects of heresy, democracy or secularism."On September 9, Zawahiri rejected the legitimacy of the Islamic State caliphate, but he expressed a willingness to cooperate with ISIS forces in fighting in Iraq and Syria. In a previous audio recording, the al-Qaida leader said, "If I was in Iraq or Syria, I would cooperate with ISIS against the Crusaders, atheists and Shi'ites - despite the fact that I don't recognize the legitimacy of the group's Caliphate, because the issue is bigger than them or me."