JPost joins Kurds in face of mortars, snipers on the road to Mosul 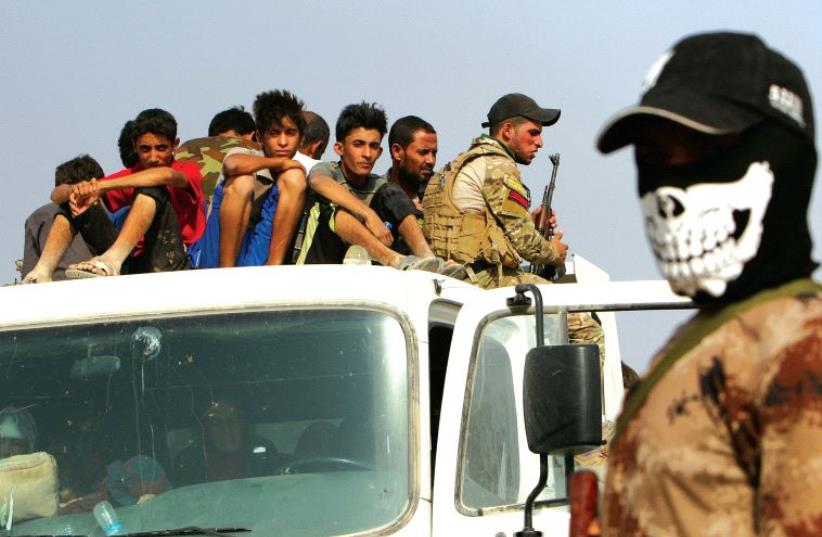 Displaced Sunnis wait near Qaraya for Iraqi forces to transport them to safety after escaping from Islamic Statecontrolled villages in the Mosul region
(photo credit: REUTERS)
Advertisement
NAWARAN, Kurdistan Region, Iraq – The dust mixes with cigarette smoke as we drive out of a hamlet that has just been liberated on day four of the Mosul offensive in northern Iraq. I hitch a ride with a multi-barrel rocket launcher team whose weapon is mounted on the back of a pickup truck.
Seth Frantzman embedded with peshmerga forces in Iraq
After firing some volleys at a village called Fasalia, which is still occupied by Islamic State, the team decides to move when sniper fire hits nearby. A mortar shell strikes to one side of us, and lying beneath a mine-clearing vehicle is a dead snake, about a meter in length. It seems that here, everything is out to kill us.The Mosul offensive, which kicked off last Monday, is pushing ahead slowly and in phases along a long front. The first wave of Peshmerga who advanced toward Nawaran on Tuesday moved out of a trench line along a hillock. For the better part of two years, the front here has been relatively static, with Kurds looking down over a long plain that was dominated by ISIS.The Mosul operation, which includes Kurdish Peshmerga, the Iraqi Army, the American- led coalition and many other small allied forces, such as Christian militias and Turks, seeks to destroy the last stronghold of ISIS in Iraq. For a few hours, the Peshmerga and I walk and drive with what feels like the tip of the spear in this epic battle.Driving northeast from the Kurdish regional capital of Erbil, there is a row of hills that overlook the ISIS-held town of Bashiqa in the valley below. Smoke billows from oil fires and from recent artillery and air strikes. It creates a smog that hangs heavily, like the fighting and death taking place below.On the heights, all the Peshmerga can do is watch, as their comrades at the end of the line painstakingly move forward into the villages below. The men want a fight, and flash victory signs, but their commanders are reticent to lose lives by going house to house in the villages. They know ISIS has left warrens of tunnels and explosives. Watching the men advance across open fields, it conjures up visions of World War I, except with armored vehicles and pickup trucks everywhere, and US air power thundering overhead.At Nawaran, hundreds of trucks, humvees, and private cars clog the road to the front. Men have come from all over Kurdistan to join their units and do their part. Some come in uniform, their trucks laden with sleeping pads, food and water.Others come to see what is happening. One man even arrives in a sporty new suit, as if he’s been at a wedding, an AK-47 slung over his shoulder and a bulky green armored vest underneath the suit.After the morning’s initial advances carve out a new front line, we join the second wave of men on foot who set off to build up the new positions and relieve their comrades. Instead of proceeding along a main road, heavy equipment, including front loaders, had charted a route through the fields. They had cleared a path from the mines that ISIS laid to line the roads, but some vehicles suffered from the IEDs, their tires blown up and badly damaged.The village in front of us is festooned with snipers and mortar positions, dug in amid houses built of concrete and mud. Artillery fire falls on it sporadically from the heights above to suppress the enemy and keep them from taking potshots at us. Most of the landscape seems deserted of civilians.This is simple, poor country, one of shepherds and villagers who live under ISIS rule. But there are people fleeing from ISIS. On Friday, around a dozen made it to the Peshmerga front line, dusty and happy to be alive. Most of them were women and children, and some were from the Shabak minority, a group persecuted by ISIS.As we walk with hundreds of men to their new positions, they become strung out in a long, endless column, their mismatched green and tan uniforms undulating like the grass. They are nonchalant, unafraid of the mortar shells that hit on both sides of the road, staunch defenders of their land, many of them in their 40s.They have been fighting this war for two years, and the older men say they have fought since the 1970s against various foes. A long supply train of vehicles comes and goes, carrying small boxes of water, potatoes, tomatoes, ammo and high ranking officers. There are engineering squads trained to clear IEDs, and Iranian Kurds from the Kurdistan Freedom Party.There are Kurds from the Patriotic Union of Kurdistan and the Kurdistan Democratic Party, the two main political parties that also maintain semi-separate units in the Peshmerga. It seems like all of Kurdistan is here in miniature. They fight and are wounded together. As I leave Nawaran on Friday, ambulances follow, taking the wounded to a hospital in Dohuk.As the Mosul operation continues, ISIS resistance is strengthening. Some Kurds say they will face up to 2,000 extremists in the villages ahead, others estimate there will be fewer. But either way, the men say they will beat them.