A communiqué in the name of Jaish al-Islam circulating on social media claims the group is an integral part of Islamic State in the Sinai. 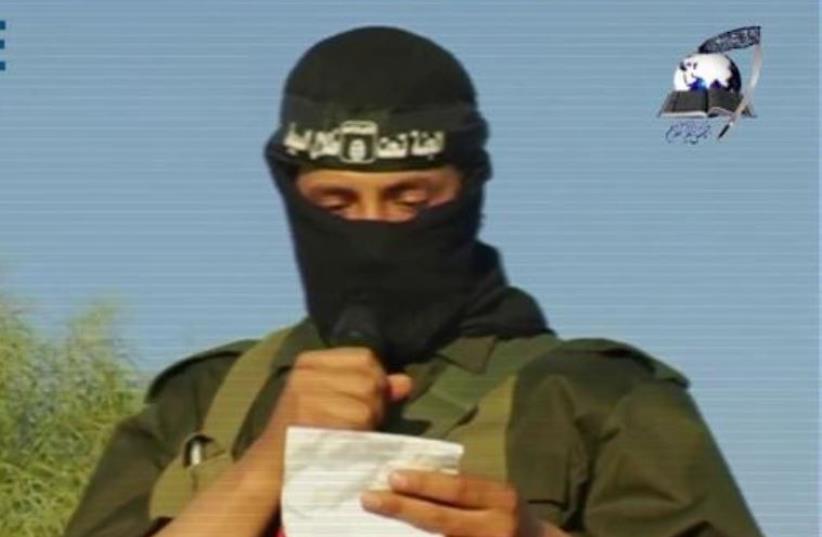 Jaish al-Islam fighter
(photo credit: ARAB MEDIA)
Advertisement
The Gaza-based militant group Jaish al-Islam [Army of Islam] has pledged formal allegiance to ISIS, according to a communiqué attributed to the group that was circulated on the Internet on Wednesday. The communiqué in the name of Jaish al-Islam has been circulating through the Jihadi Twittersphere and Facebook, with the statement: “We, the soldiers of Jaish al-Islam in the Gaza Strip and our leader Mumtaz  Dughmush, may Allah preserve him, we consider our selves to be an integral part of Wilayat Sinai [ISIS in the Sinai Peninsula]…we pledge allegiance to Abu Bakr al-Baghdadi al-Qurayshi, the Caliph to all Muslims in the House of Islam and each place where Muslims reside.”The communiqué continues: “We swear to our brothers that, with might, we will not stop our fight against the Jews and the apostates in Gaza and in the Sinai” until the flag of the Islamic State is raised above them. Jaish al-Islam, led by the leader of the Dughmush clan, Mumtaz Dughmush, is one of the Gaza Strip’s oldest and most powerful Jihadi-Salafi groups. The group is perhaps best known for kidnapping BBC reporter Alan Johnston in 2006 in Gaza, as well as taking part in the operation with Hamas to kidnap Israeli soldier Gilad Schalit. There has been no official confirmation from the group’s leader that the communiqué is official, which casts doubt on its authenticity. Michael Horowitz, a security analyst and member of the Levantine Group, told The Jerusalem Post that  “the publication could indeed be a fake, in the sense that it might actually not come from the group's leadership itself. It is extremely difficult to verify such documents.”Horowitz, however, does believe the communiqué is significant whether or not it is from the group’s main leadership.“In my opinion it does reflect the fact that at least part of the group pledged allegiance to ISIS. In fact the statement might represent an attempt by pro-ISIS members of the group to pressure the leadership into clarifying its position toward ISIS. This is a tricky issue for the group. An official pledge of allegiance to ISIS may justify the Hamas crackdown, both because Hamas feels that its rule is threatened inside Gaza, and because it is also under a lot of pressure from Egypt, which sees a connection between Gaza militants and the ISIS branch in Sinai.”    Members of Jaish al-Islam already published a video in early July praising ISIS. Horowtiz believes Wednesday’s communiqué may have been inspired by ISIS’s recent attempts to increase their recruitment effort among Palestinians, which was very recently highlighted in the latest issue of ISIS's Dabiq magazine. Aside from the pledge of allegiance, the communiqué opens with what has become the classic Jihadi-Salafi rebuke against Hamas by castigating the rulers of Gaza for oppressing Muslims and working for the “interests of the Jews.” Early in July, a former leader of Jaish al-Islam, Sheikh Issam Saleh, held a press conference in Al-Joundi al-Majhoul Square in Gaza City, in which he described the need and the process of reconciliation between Salafi groups and Hamas in the Gaza Strip. Saleh called for the release of Salafi militants from Hamas jails and to “provide necessary resources and training for Jihad.” The Sheikh also called for the return of all weapons confiscated from the Salafi groups by Hamas.The press conference came amid a serious crackdown by Hamas on Salafis in Gaza at the behest of the Egyptian government, following a significant attack by ISIS against the Egyptian military in the Sinai  Peninsula on July 1. Additionally, the Islamic State released a video on June 30, a week before the conference, threatening to attack Hamas for not implementing Sharia law. To this effect, Saleh said that what was happening in the Sinai is a result of differences with the Egyptian government, but that the Jihadi-Salafis in Gaza limit their work to “targeting the Jews.”The complicated relationship between Hamas and the Jihadi-Salafi militant groups has its roots in 2006, when Hamas participated in democratic elections. Many of the Jihadi-Salafi fighters were once part of Hamas. However, the participation in elections as well as Hamas’s governing style which does not enforce a Salafi interpretation of Sharia, has put Hamas at odds with the Jihadi-Salafi ideology. For this reason, the Jihadi-Salafi groups in Gaza often refer to the Hamas government as “apostate.” Dov Lieber is an Middle East affairs analyst and freelance reporter. You can find him on twitter: @Dovlieber