Russian president says that, by being in Syria, troops prevent threats posed to their country by Islamists and protect its citizens. 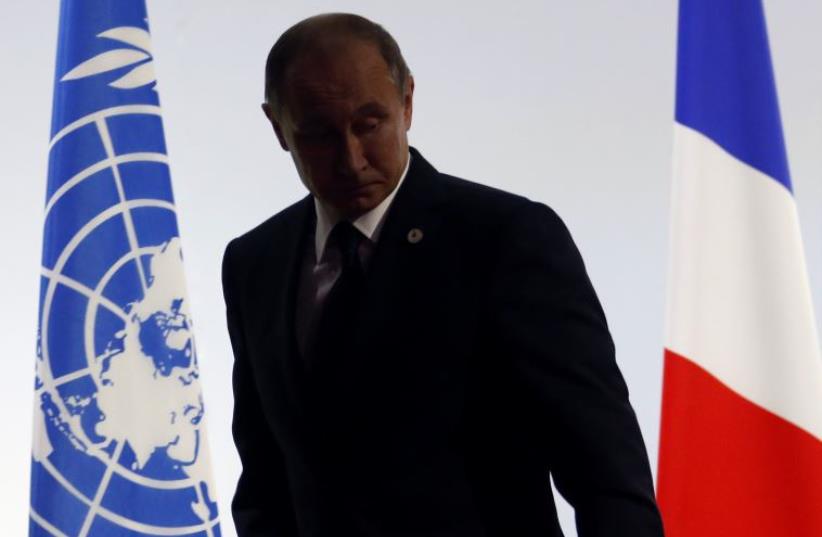 Russian President Vladimir Putin leaves after delivering a speech for the opening day of the World Climate Change Conference 2015
(photo credit: REUTERS)
Advertisement
President Vladimir Putin on Friday ordered Russia's armed forces to act in an "extremely tough way" in Syria to protect Russian forces striking Islamic State targets there.By being in Syria, Russian troops prevent threats posed to their country by Islamists and protect its citizens, he said."Our servicemen in Syria first of all defend their country. Our actions there are not dictated by some unclear, abstract geopolitical interests. They are not dictated by the desire to carry out drills and to test new weapons, which is also important of course. But it is not the most important, the most important is to prevent the threat to the Russian Federation," Putin told an annual meeting at the defense ministry.Putin said strikes by Russia's air force and navy had inflicted heavy damage on the infrastructure of Islamic State, which controls large areas of eastern Syria and western Iraq."Multipurpose use of the Space and Air Force and the Navy, use of the most modern high precision weapon system allowed us to cause serious damage to terrorists' infrastructure and to radically change the situation in Syria", Putin said."I order to act extremely tough. Any targets threatening Russian Armed Forces group or our ground-based infrastructure are to be destroyed immediately," Putin added.Defense Minister Sergei Shoigu said, however, that the influence of Islamic State was increasing in Syria, where militants control around 70 percent of the country."Islamic State is extending its zones of influence. Militants have seized about 70 percent of the territory of Syria and most of the districts of Iraq. The number of terrorists is over 60.000 people. There is a threat that their activities might spread to Central Asia and the Caucasus," Shoigu said.Moscow's military force in Syria has grown to about 4,000 personnel, but this and more than a month of Russian air strikes have not led to pro-government forces making significant territorial gains, US security officials and independent experts said.Moscow, which has maintained a military presence in Syria for decades as an ally of the ruling Assad family, had an estimated 2,000 personnel in the country when it began air strikes on Sept. 30. The Russian force has since roughly doubled and the number of bases it is using has grown, US security officials said.