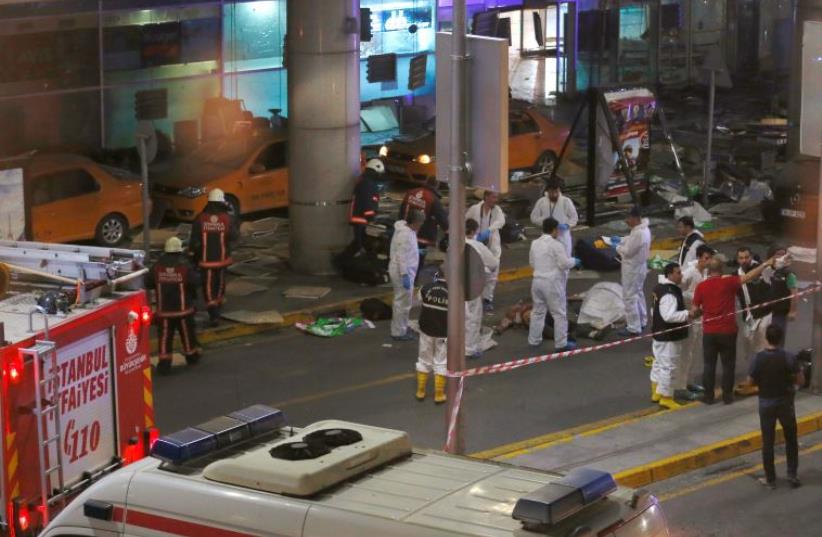 Forensic experts work outside Turkey's largest airport, Istanbul Ataturk, Turkey, following a blast, June 28, 2016.
(photo credit: REUTERS)
Advertisement
Turkish intelligence units allegedly warned relevant government bodies about a possible attack by Islamic State terrorist in Istanbul week before Tuesday night's deadly attack by three suspected ISIS suicide bombers. According to Turkish media Wednesday, the country's intelligence apparatus sent a warning letter to state institutions some 20 days ago about a potential attack. Turkish Hurriyet Daily News cited Doğan TV as reporting that the June warning message mentioned the names of potential targets, including Istanbul Atatürk Airport.
Amatuer video shows Turkey airport after terror attack
Turkish investigators have been poring over video footage and witness statements after the three attackers opened fire and blew themselves up in Istanbul's main airport, killing 41 people and wounding 239.The attack on Europe's third-busiest airport was the deadliest in a series of suicide bombings this year in Turkey, part of the US-led coalition against Islamic State and struggling to contain spillover from neighboring Syria's war.President Tayyip Erdogan said the attack should serve as a turning point in the global fight against terrorism, which he said had "no regard for faith or values". Five Saudis and two Iraqis were among the dead, a Turkish official said. Citizens from China, Jordan, Tunisia, Uzbekistan, Iran and Ukraine were also among the 13 foreigners killed.One attacker opened fire in the departures hall with an automatic rifle, sending passengers diving for cover and trying to flee, before all three blew themselves up in or around the arrivals hall a floor below, witnesses and officials said.Video footage showed one of the attackers inside the terminal building being shot, apparently by a police officer, before falling to the ground as people scattered. The attacker then blew himself up around 20 seconds later.Israel has condemned the attack, with Prime Minister Benjamin Netanyahu saying a united front by "civilized nations" is need to combat the "scourge of terrorism."