The brothers Farook: One a decorated veteran, the other a killer

Syed Raheel Farook and his younger brother Syed Rizwan Farook grew up in the same house, attended the same high school, and socialized in the same groups. But as they grew older their paths diverged. 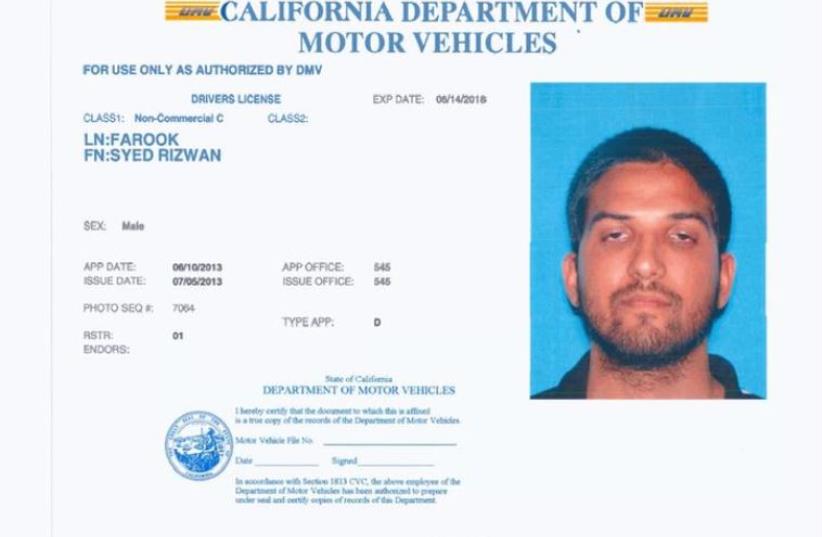 Syed Rizwan Farook is pictured in his California driver's license, in this undated handout provided by the California Department of Motor Vehicles, December 3, 2015.
(photo credit: REUTERS)
Advertisement
SAN BERNARDINO, CA - One brother liked to party and chase girls. After high school, moved by what he saw as his patriotic duty, he enlisted in the Navy and received two medals recognizing his contributions to "the global war on terror."The other was deeply religious and became increasingly intolerant, ultimately nursing a growing hatred that led him, along with his wife, to open fire on a San Bernardino holiday party last week, in what law enforcement officials have termed a terrorist attack.
Landlord says Farook a "normal" person, as media swarm apartment
Syed Raheel Farook and his younger brother Syed Rizwan Farook grew up in the same house, attended the same high school two years apart and, as teenagers, often socialized in the same groups. But as they grew older their paths diverged.Rizwan is now dead, gunned down by police in Southern California after joining with his wife in killing 14 people and injuring 21. Raheel is alive and left to wonder what went wrong.The contrasting lives of the Farook brothers, described by friends, neighbors and former classmates who knew them both, is a disturbing tale, in part because there are so few clues to why they turned out so differently.The family, including Raheel, declined repeated requests through their lawyers for comment for this story. But those who knew the brothers say that by high school, their differences were apparent and growing."Most people here go to mosque to please their parents," said Shakib Ahmed, who attended mosque with the Farooks.Raheel, the older brother, was that kind of kid, he said. He went to Friday prayers, but he also liked to drink and had a girlfriend in high school who wasn't Muslim.Rizwan was quieter and more serious - and far more religious. Only with his older brother, friends said, did they see Rizwan lose his temper."He was nice to everyone else, but he was kind of the dominating type. He would yell at his brother," Ahmed said.PHYSICAL DISTANCESoon after graduating from high school in 2003, with the U.S. invasion of Iraq just months old, Raheel joined up and went off to boot camp in Illinois, according to naval records. In 2004, he was assigned to serve on the USS Enterprise as an information system technician.Back home, Rizwan, a bright boy, finished high school a year early according to school records. In the years that followed, friends and neighbors say, he quit wearing jeans and polo shirts and donned robes."I noticed a change with the clothes and the beard," said Ahmed.At home, there was increasing turmoil. In 2006, the boys mother, Rafia Farook, filed for divorce from her husband Syed after more than 24 years of marriage, according to court documents.In court filings, Rafia cited multiple instances of domestic abuse, asserting that her husband was "mentally ill" and threatened "to kill himself on a daily basis." During one violent incident, she said, her son came between them "to save me."Gasser Shehata, a friend of Rizwan's from a San Bernardino mosque, said that Rizwan talked to him in recent years about his religious issues with his dad while growing up, and how he came to side with his mother in their disputes. Shehata said that Rizwan told him that his father refused to pray regularly, which was a source of tension.When Rizwan joined the dating site bestmuslim.com in 2013, his profile described how he spent much of his free time "memorizing the Qur'an and learning more about the religion."He was looking, he wrote, for a woman "who takes her religion very seriously and is always trying to improve her religion and encouraging others to do the same."Even as the distance between the brothers grew, they remained bonded.Attendees at Rizwan's wedding reception last year at the Islamic Center of Riverside said Rizwan seemed to enjoy his brother's easy and relaxed manner with the guests, even though he said little and seemed withdrawn. At one point, Raheel even teased his younger brother, calling him "Rizi," which Rizwan took in good humor.Some of those who knew the Farooks have thought deeply about the brothers and their differences in recent days. But many of the things they come up with could apply to any siblings."Raheel was just a normal ... guy," said Usmaan Arshad, who attended La Sierra High School with the brothers. "No one talked to Rizwan," he said.Rose Aguirre, a neighbor of the family for years, said the difference between the Farook sons had seemed to her to boil down to the fact that Raheel was "more personable, more Americanized" than his brother.But those characterizations worked only before last week, when it became apparent that the differences went far deeper.Attorney David Chesley told CNN on Monday that Raheel "is very upset with his brother.""He's totally depressed and broken with grief."