UK joins the fight against Islamic State in Syria

In their first strike in Syrian territory, the UK warplanes struck six times the Omar oilfield under Islamic State control. 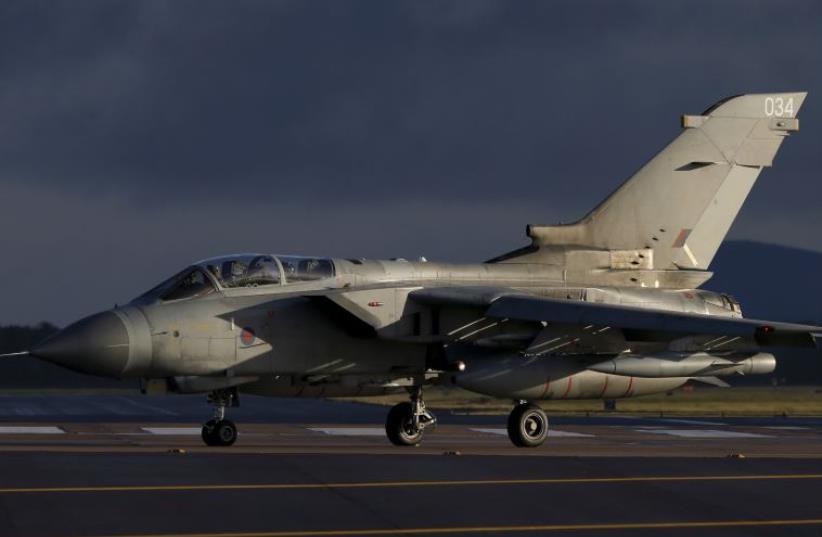 A British Royal Air Force jet
(photo credit: REUTERS)
Advertisement
WASHINGTON -- With encouragement from France and the United States, the House of Commons on Wednesday night voted to extend the United Kingdom's air assault against Islamic State to Syria, where the group has metastasized and taken refuge since 2013.Royal Air Force Typhoons and Tornadoes took to the skies from a British base in Cyprus less than an hour after the parliamentary vote. In their first strike in Syrian territory, the UK warplanes struck six times the Omar oilfield under Islamic State control– a "mainstay" of the group's financial income, the British defense ministry said in a statement.Overnight, the ministry doubled its airpower at its Cyprus base in Akrotiri. The British fighters will be working in coordination with over half a dozen allied nations fighting Islamic State in Syria, including France, the US, Australia, Jordan, the United Arab Emirates, Qatar and Saudi Arabia, after joining the fight against the group in Iraq last year.“These women-raping, Muslim-murdering, medieval monsters, they are hijacking the peaceful religion of Islam for their warped ends," Cameron said in his plea for parliamentary support on Wednesday morning. "These people are not Muslims, they are outlaws from Islam, and we must stand with our Muslim friends here and around the world as they reclaim their religion from these terrorists."The well-financed terrorist organization, which orchestrated a sophisticated attack on Paris last month, seek to strike the West "because of who we are," Cameron said, "not because of what we do." He warned of a similar strike in London unless Britain stood up to defend itself and its citizens around the world.Over 60 members of Cameron's opposition in the Labour Party crossed the aisle to support the prime minister, even as the specter of the Iraq war loomed on Whitehall and anti-war protesters chanted loudly enough outside to be heard in the parliament's chambers.UK foreign secretary Philip Hammond said that a war against Islamic State could not be won with airpower alone, and noted that a ground assault on Raqqa – the group's nominal capital– could be years away. But airstrikes would make a difference, he argued, and would keep Great Britain safe."The decision tonight is this," Hammond said: "Do we bring the fight to them, or do we wait for them to bring the fight to us?"The vote was cast after ten and a half hours of debate, and resulted in a tally of 397 in favor versus 223 against.