The latest graves found contained the remains of at least 40 people. 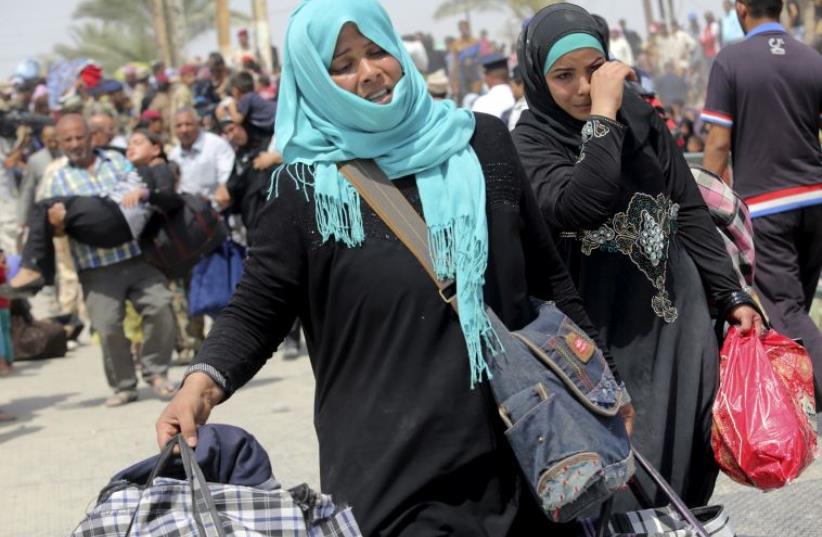 Displaced Sunni women fleeing the violence in Ramadi, carry bags as they walk on the outskirts of Baghdad, May 24, 2015.
(photo credit: REUTERS)
Advertisement
More than 50 mass graves were discovered in parts of Iraq that were previously occupied by the Islamic State providing additional evidence that the militant group may be committing genocide, UN special representative Jan Kubis told the UN Security Council on Friday.Kubis revealed that the most recent discovery in the football grounds of central Ramadi on April 19 revealed three mass graves containing the remains of as many as 40 people. “As territory is retaken from the criminal and terrorist gangs of Daesh, evidence of the heinous crimes they have committed continues to be uncovered,” Kubis said to the council. Kubis also emphasized that there is a continued forced recruitment by ISIS of Yazidi children into their ranks for use as militants in Syria and Iraq and he explained that the fate of thousands of Yazidi women and girls still remains unknown.  "Limited but notable efforts undertaken by the Iraqi Government and the Kurdistan Regional Government, together with tribal leaders, have successfully led to the release of some of these women and girls, but much more needs to be done," he added.The UN representative explained that military action taken against the Islamic State must also be accompanied by humanitarian aid and rehabilitation efforts.“Without addressing the root causes of violent extremism and the underlying ideology, efforts will not be sustainable and lasting," explained Kubis.'Military victories need to be complemented by support for the people who are displaced and increased stabilization and rehabilitation efforts that prioritize rule of law and good governance,” Kubis said.Kubis concluded his remarks to the UN Security Council by condemning the continued violence, "killings, kidnapping, rape and torture of Iraqis by ISIL, which may constitute crimes against humanity, war crimes and even genocide."ISIS in 2014 swept through a third of Iraq, seizing Mosul, the largest city in the north, and reaching the vicinity of Baghdad.Counter-offensives by Iraqi and Kurdish armed forces supported by the US-led coalition, and by Iran-backed Shi'ite militias forced them out of several cities since, including Tikrit, north of Baghdad, and Ramadi, to the west. Reuters contributed to this report.