US says prepared for military solution against Islamic State in Syria

A US official later clarified that Biden was talking about a military solution to Islamic State, not Syria as a whole. 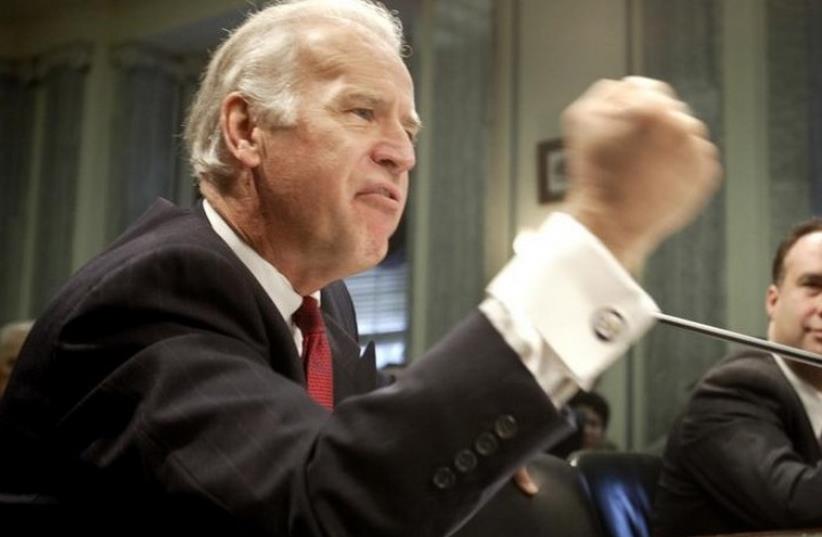 JOE BIDEN: "If you were attacked and overwhelmed, we would fight for you."
(photo credit: REUTERS)
Advertisement
US Vice President Joe Biden said on Saturday that the United States and Turkey were prepared for a military solution against Islamic State in Syria should the Syrian government and rebels fail to reach a political settlement.The latest round of Syria peace talks are planned to begin on Monday in Geneva but were at risk of being delayed partly because of a dispute over who will comprise the opposition delegation.Syrian armed rebel groups said on Saturday they held the Syrian government and Russia responsible for any failure of peace talks to end the country's civil war, even before negotiations were due to start."We do know it would better if we can reach a political solution but we are prepared ..., if that's not possible, to have a military solution to this operation in taking out Daesh," Biden said at a news conference after a meeting with Prime Minister Ahmet Davutoglu. Daesh is the pejorative Arabic acronym for Islamic State insurgents who hold parts of Syria.A US official later clarified that Biden was talking about a military solution to Islamic State, not Syria as a whole.The Saudi-backed Syrian opposition ruled out even indirect negotiations unless Damascus took steps including a halt to Russian air strikes.Biden said he and Davutoglu also discussed how the two NATO allies could further support Sunni Arab rebel forces fighting to oust President Bashar al-Assad.The United States has sent dozens of special forces soldiers to help rebels fighting Islamic State in Syria although the troops are not intended for front line combat.Along with its allies Washington is also conducting air strikes against Islamic State militants who hold large chunks of Syria and Iraq and support opposition fighters battling the group.US Secretary of State John Kerry said on Saturday he was confident Syria peace talks would proceed, after he held talks with Gulf Cooperation Council (GCC) states in Saudi Arabia.

DISAGREEMENT OVER SYRIAN KURDISH GROUPSaleh Muslim, co-chair of the Kurdish Democratic Union Party (PYD), the main Kurdish political grouping in Syria, said on Friday the Syria peace talks would fail if Syrian Kurds are not represented.While the United States draws a distinction between PYD, whose fighters it supports, and the outlawed Kurdistan Workers Party (PKK) in Turkey, Davutoglu reiterated the Turkish position that the PYD's military wing is part of and supported by the PKK.The PYD's military wing, the People's Protection Units (YPG) has seized swathes of Syria from Islamic State with the help of US-led strikes and declared it an autonomous administration, to Ankara's chagrin.Davutoglu said on Saturday the YPG had become an increasing threat to Turkey. According to local media, on the way to Turkey from Davos, he also told reporters Ankara would strike YPG in northern Syria just like it hits PKK targets in northern Iraq.Ankara has fought a decades-long insurgency against Kurdish PKK separatists which in July reignited into a violent confrontation with Turkish security forces.Biden strongly criticised the PKK which is designated a terrorist organisation by the United States, the European Union and Turkey.In his speech following talks, Davutoglu also reiterated the Turkey's respect for the territorial unity of Iraq, where it deployed troops despite Baghdad's objections.The prime minister's office later released a statement saying the US and Turkey had reconciled on the question of Bashiqa camp in Iraq, where the Turkish troops are stationed.Biden went on to meet with President Tayyip Erdogan, but an expected joint statement did not go ahead.