Diplomats say cutting Islamic State's access to the Turkish border, across which it has been able to bring foreign fighters and supplies, could be a game-changer. 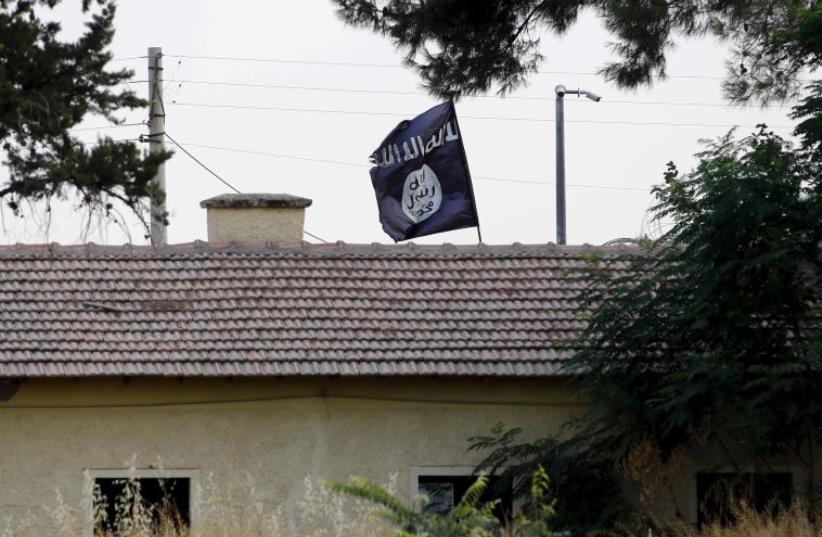 An Islamic State flag flies over the custom office of Syria's Jarablus border gate as it is pictured from the Turkish town of Karkamis
(photo credit: REUTERS)
Advertisement
ANKARA - Turkey and the United States will soon launch "comprehensive" air operations to flush Islamic State fighters from a zone in northern Syria bordering Turkey, Foreign Minister Mevlut Cavusoglu told Reuters on Monday.Detailed talks between Washington and Ankara on the plans were completed on Sunday, and regional allies including Saudi Arabia, Qatar and Jordan, as well as Britain and France may also take part, Cavusoglu said in an interview."The technical talks have been concluded, yesterday, and soon we will start this operation, comprehensive operations, against Daesh (Islamic State)," he said.The United States and Turkey plan to provide air cover for what Washington judges to be moderate Syrian rebels as part of the operations, which aim to flush Islamic State from a rectangle of border territory roughly 80 km (50 miles) long, officials familiar with the plans have said.Diplomats say cutting Islamic State's access to the Turkish border, across which it has been able to bring foreign fighters and supplies, could be a game-changer. US jets have already begun air strikes from Turkish bases in advance of the campaign.Cavusoglu said the operations would also send a message to President Bashar al-Assad and help put pressure on his administration to come to the negotiating table and seek a political solution for Syria's wider war.Separately, the Turkish foreign minister said he welcomed the normalization of Iran's relations with some Western countries in the wake of its nuclear deal, but said Tehran now needed to take a "more constructive role" in regional crises including Syria, Iraq and Yemen.Turkey's military operations against Kurdish militants from the Kurdistan Workers' Party (PKK) in northern Iraq and southeastern Turkey, where Ankara has been carrying out air strikes over the past month, would continue until the group laid down its weapons, Cavusoglu also said.