Photo shows can of Schweppes Gold soft drink and what appears to be a detonator and switch on a blue background. 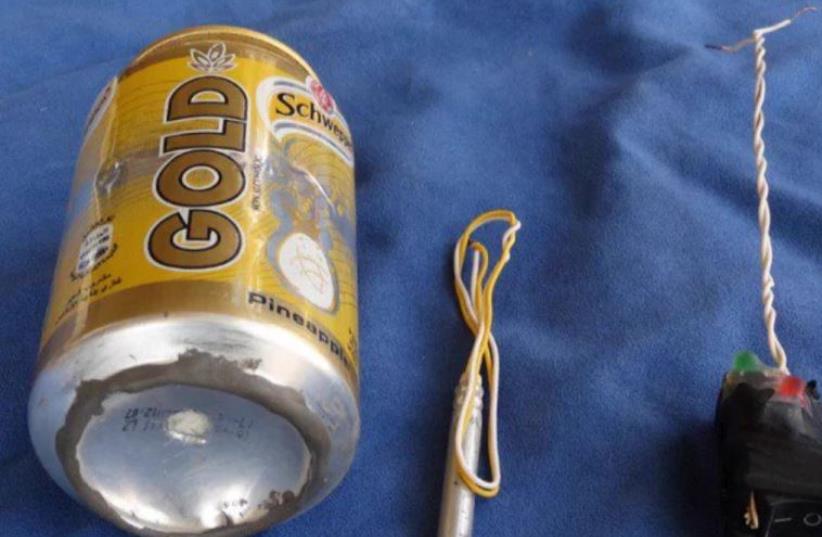 Photo of the Islamic State's improvised bomb that brought down the Russian airliner over Egypt's Sinai Peninsula last month.
(photo credit: ISLAMIC SOCIAL MEDIA)
Advertisement
CAIRO - Islamic State's official magazine carried a photo on Wednesday of a Schweppes drink it said was used to make an improvised bomb that brought down a Russian airliner over Egypt's Sinai Peninsula last month, killing all 224 people on board.The photo showed a can of Schweppes Gold soft drink and what appeared to be a detonator and switch on a blue background, three simple components that if genuine are likely to cause concern for airline safety officials worldwide."The divided Crusaders of the East and West thought themselves safe in their jets as they cowardly bombarded the Muslims of the Caliphate," the English language Dabiq magazine said in reference to Russia and the West. "And so revenge was exacted upon those who felt safe in the cockpits."Western governments have said the plane was likely brought down by a bomb and Moscow confirmed on Tuesday it had reached the same conclusion, but the Egyptian government says it has still not found evidence of criminal action.Islamic State also published a photo of what it said were passports belonging to dead Russians "obtained by the mujahideen". It was not immediately possible to verify the authenticity of the published photos.The group, which has seized large swathes of Syria and Iraq, said it had exploited a loophole at Sharm al-Sheikh airport, where the plane originated, in order to smuggle a bomb on board.The airport is widely used by budget and charter airlines to fly tourists to the nearby resorts on the Sinai coast.Islamic State said it had initially planned to bring down a plane belonging to a country participating in the U.S.-led coalition bombing it in Syria and Iraq, but it changed course after Moscow started its own air strikes campaign in Syria."A bomb was smuggled onto the airplane, leading to the deaths of 219 Russians and five other crusaders only a month after Russia's thoughtless decision," it said.Egypt's interior minister told a news conference in Sharm al-Sheikh on Tuesday that there was "no information" about security lapses at the airport.Islamic State's Egyptian branch, Sinai Province, claimed responsibility for the attack the day it happened but Egyptian officials were quick to dismiss talk of a bomb as premature.