The issue came to the forefront this week after the Joint List parties Balad and Hadash condemned the decision of Gulf states to label Hezbollah a terrorist organization. 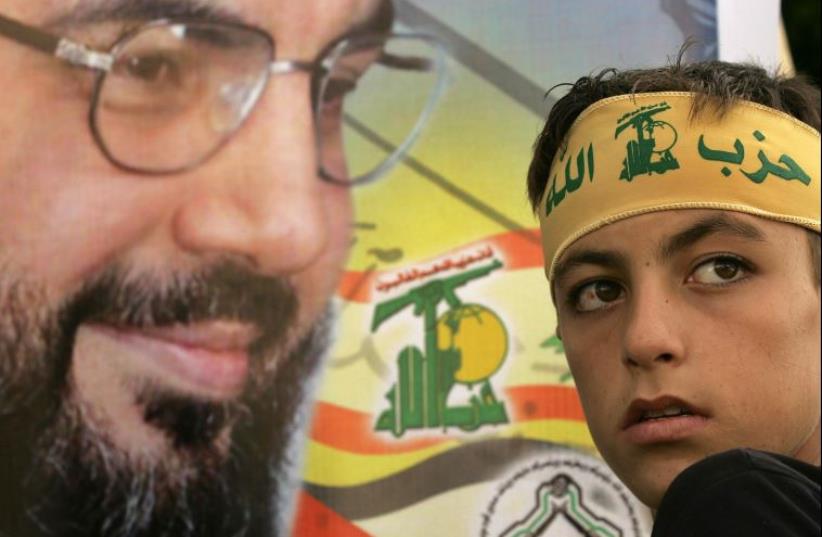 A young Hezbollah follower leans toward an image of the group's leader, Hassan Nasrallah
(photo credit: AFP PHOTO)
Advertisement
The division in opinion among Arab Israelis over the war in Syria and support for Hezbollah or Sunni rebels is mainly determined by the person’s ideological affiliation.The issue came to the forefront this week after the Joint List parties Balad and Hadash condemned the decision of Gulf states to label Hezbollah a terrorist organization.Balad, established in 1995, has a pan-Arab nationalist ideology similar to that of the Ba’ath Party of Syrian President Bashar Assad. Religious identity is much less emphasized than the Arab one, which historically has allowed minorities such as Christians and Alawites to take part so as to downplay their religious differences.Balad’s original party head, former MK Azmi Bishara, fled to Qatar in 2007 after being accused of spying for Hezbollah.He had previously praised Hezbollah and the previous Syrian president Hafez Assad, the father of the current leader.However, for the most part, Bishara has been promoting Qatar’s agenda of supporting Islamist groups in the region and its support for the Syrian opposition. This has created internal conflict within the party.The communist Hadash party, which is mainly Arab but calls itself a Arab-Jewish party, also de-emphasizes religion and for that reason incorporates Arab Christians, Druse, and some Jews.It is notable and unsurprising that the United Arab List party of the southern branch of the Islamic Movement did not join Balad and Hadash in defending Hezbollah.Those who identify more with Islam are more likely to support the Islamist-dominated Sunni Syrian rebels that seek to topple the relatively secular Alawite regime of President Bashar Assad.Sunnis loathe the fact that an Alawite, deemed heretical by many Sunnis, is ruling over a country dominated by Sunnis.Dr. Thabet Abu-Rass, co-executive director of the Abraham Fund, an NGO dedicated to improving coexistence between Arab and Jewish citizens, told The Jerusalem Post in an interview on Tuesday that Arab citizens of Israel are mixed in their views of the Syrian conflict, but tend to agree on the domestic struggle for equality and economic advancement, and against racism.“There is strong support in Hadash for the Syrian regime,” which is opposed by both branches of the Islamic Movement.He notes that the recently banned northern branch head, Raed Salah, favors the toppling of Assad.“Bishara has been running the party from abroad and the decision by Balad to support Hezbollah and Assad can be seen as a sign of the political independence of the party from his grasp,” said Abu-Rass.On Sunday, there was a vote among Balad leaders on who to support and the majority backed Hezbollah leader Hassan Nasrallah, revealed Abu- Rass. This marks “a big victory for Balad head Jamal Zahalka” against Bishara.Abu-Rass explains that many in Balad criticize Assad’s regime for the way it is carrying out the war, but there is no doubt that they prefer a nationalist secular regime than Islamic State or other Islamist groups.He also said that the Abraham Fund believes Hadash and Balad caused damage to Jewish-Arab relations and their leaders “need to show responsibility and sensitivity.”“We are not only part of the Palestinian people, but also part of Israel and we want it to stay this way,” he commented.“We need to be more responsible and work together in the struggle against racism and ideas to transfer the Arabs out of Israel.”