The book said James Mattis, the defense secretary, told Trump he would "get right on it" but instead developed a plan for a limited air strike that did not threaten Assad personally. 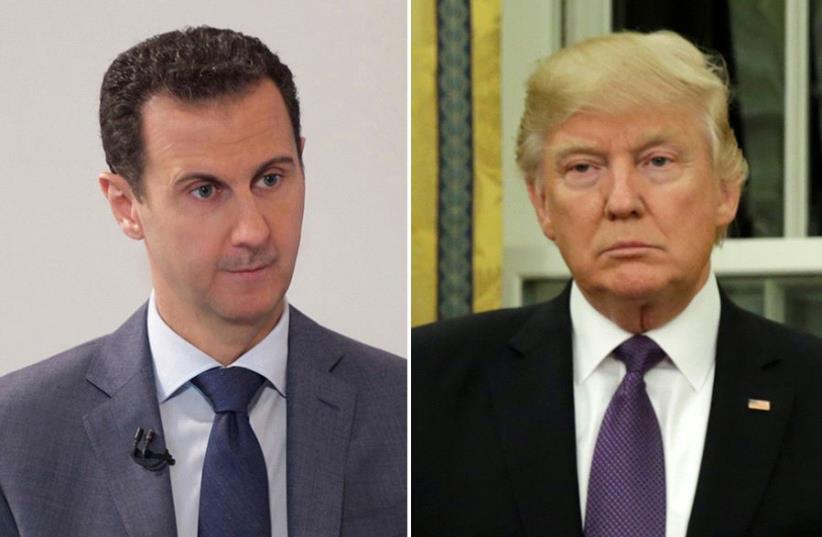 Assad and Trump
(photo credit: REUTERS)
Advertisement
JERUSALEM - Israel's intelligence minister said on Wednesday he had no knowledge of close ally US President Donald Trump ever ordering the killing of Syria's President Bashar Assad.A new book by Watergate reporter Bob Woodward, Fear: Trump in the White House, says Trump told his defense secretary that he wanted to have Assad assassinated in response to a chemical attack on Syrian civilians in April 2017.The book said James Mattis, the defense secretary, told Trump he would "get right on it" but instead developed a plan for a limited air strike that did not threaten Assad personally.Trump tweeted that quotes attributed to Mattis were "made up frauds, a con on the public." Mattis dismissed the book as "a uniquely Washington brand of literature.""I do not know of any such instruction. He (Trump) is also denying it, by the way," Israeli Intelligence Minister Israel Katz told Tel Aviv radio station 103 FM."In any event, what can be said is that in the framework of the coordination between the United States and Israel ... the subject of the Syrian regime is certainly part of the discussions. Israel did not take a decision to topple Assad."While formally neutral on the 7-year civil war in neighboring Syria, Israel has carried out scores of air strikes against suspected attempts by Assad's Iranian and Lebanese Hezbollah allies to set up permanent posts or advanced arms.Under decades of Assad family rule, Syria has maintained a Cold War-style hostility toward Israel. Katz said Israel did not see a better alternative to Assad among Syrian rebel groups."Of course his (Assad's) actions are terrible actions, and something that we abhor and condemn. Those opposing him, ISIS and others, are not a side that we think are better. We took care to preserve our interests," Katz said.Woodward gained national fame for his reporting on the Watergate scandal in the 1970s, and has since written a number of books that provide behind-the-scenes glimpses of presidential administrations and other Washington institutions.For this book, Woodward spoke to top aides and other insiders with the understanding that he would not reveal how he got his information, said the Washington Post, which published excerpts from the book on Tuesday.