Bashar al-Assad is the 19th president of Syria. He entered office in 2000. As president, Assad is also commander-in-chief of the Syrian armed forces and regional secretary of the socialist Ba’ath Party in Syria. Born in 1965, Assad is the third son of the late Syrian president Hafez al-Assad, who held office from 1971-2000. Before replacing his father as president, Assad studied medicine at Damascus University, graduating as an opthamologist in 1988. He served in the Syrian Army for four years as a doctor. In 1992 he moved to London to continue his studies, but was called back to Syria when his older brother Bassel, who had been designated to replace their father as president, was killed in an automobile accident. Assad is married to Asma al-Assad, a British woman of Syrian origin. The couple has three children. Presidency 2000-2011 On June 10, 2000 Hafez al-Assad passed away, and on June 18, 2000 Bashar was appointed General Secretary of the ruling Ba’ath Party. Soon after, after running as an unopposed candidate for the presidency, he was elected to a 7 year term in office. At first, Assad was seen as a better alternative to his father by many Syrians. They hoped the well-educated younger Assad, with his background and exposure to the West, would bring about changes to the status-quo. Assad stated that democracy was “a tool to a better life,” but that it couldn’t be rushed into Syria. At first, Assad somewhat successfully helped Syria ease out of the economic troubles it was in at the end of the 90s. Modernization gradually entered the Syrian public and private spheres. However, with the US invasion of Iraq in 2003 relations with the US grew shakier, and Assad’s rhetoric became more and more anti-Western. In 2005, Lebanon’s former prime minister, Rafiq al-Hariri, was assassinated. Syria was accused of involvement in the assassination. In 2007, Assad was re-elected to office by a nearly unanimous majority. Syrian Civil War In 2011, inspired by other Arab Spring protests throughout the Middle East, waves of unrest began breaking out in Assad’s Syria, in time turning into the bloody Syrian Civil War. Many of the protesters were opposed to the totalitarian rule imposed by Assad’s ruling party, in place since the time his father took office. As the war progressed Assad began making fewer and fewer public appearances. Foreign countries and military groups began sending in support for either the Syrian Army or the rebels, turning the fighting into a proxy war. In August 2013, Assad’s regime was accused by the Syrian opposition forces of using chemical weapons against its citizens. Assad denied these accusations, but several Western countries claimed to have intelligence proving that they had indeed been used by the Syrian government. A month later, Russia, Syria, and the United States came to an agreement to keep Syria’s chemical weapons under international control. Assad was called to step down from his position multiple times. However, he was re-elected in 2014, and with the help of Russian military and financial support has been able to maintain his standing. Towards late 2017 it seemed that Assad’s stability as a Syrian leader was re-establishing itself. The rebels, ISIS and other forces that had previously taken over parts of Syria had been isolated into small pockets within the country, with the Syrian government regaining most of the control over the region. The Syrian Civil War has caused the deaths of over half a million people, and a global refugee crisis of immense proportions. On Israel Upon entering office, Assad continued his father’s stance on Israel, demanding the return of the Golan Heights. He is sympathetic to the Palestinian cause, and has been accused by several Western states of backing groups such as Hezbollah in their actions against Israel. In 2008, it was confirmed by Ehud Olmert that Israel and Syria had been discussing a peace treaty. In 2011, Assad backed an initiative by the few remaining Jews in Syria to restore 10 of the country’s synagogues.
Read More
Less

Assad is a force to be reckoned with, Biden needs to recognize that - opinion

On My Mind: The Biden administration should consider a fresh approach to the Syria crisis as it weighs US engagement with the Middle East region.

"The Assad regime has subjected the Syrian people to a decade of brutality for the temerity of demanding peaceful reform," Foreign Secretary Dominic Raab said.

According to the report, Guernica 37 International Justice Chambers accuses her of being among a number of "influential actors" who encouraged and incited acts of terrorism and international crimes.

Reports have surfaced recently of both Israeli and Syrian airstrikes in areas close to the border.

The identify of the perpetrators of the attack was not published.

Could Assad’s regime make a ‘deal’ with the Trump administration?

It would be a major reversal for the Trump administration to make any kind of arrangement with Damascus. 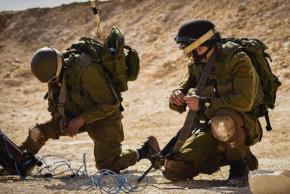 The operation was carried out following Syria's continued violation of the disengagement agreement with Israel since 1974. "We won't allow southern Syria to become southern Lebanon."

Syria's Assad blames Turkey for fighting between Azeris and Armenians

Reiterating accusations first leveled by French President Emmanuel Macron that Turkey has sent Syrian jihadists to fight in the conflict, Assad said: "Damascus can confirm this."

At 20, Bashar Assad's rule is the shame of the Arab world

MIDDLE ISRAEL: Whatever its future, Assad’s presidency has already earned him a place in history, in folklore and in hell.