Jared Kushner in Iraq for update on fight against ISIS

Trump has charged Kushner with making peace between Israel and the Palestinians, and has involved him in other foreign policy issues. 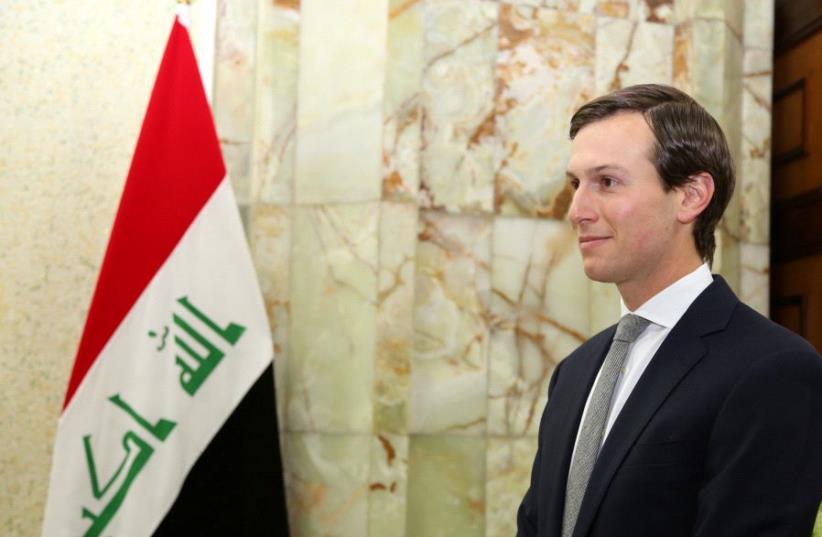 US President Donald Trump's son-in-law and senior advisor Jared Kushner visits Iraq's Defence Minister Erfan al-Hiyali in Baghdad, Iraq
(photo credit: REUTERS)
Advertisement
Jared Kushner, the Jewish son-in-law of President Donald Trump and a senior adviser, is in Iraq to receive an update on the campaign against the Islamic State.
Jared Kushner flies to Iraq with top US general (credit: REUTERS)
Kushner arrived Monday in the Middle Eastern country with the chairman of the US Joint Chiefs of Staff Gen. Joseph Dunford, according to the Department of Defense.National Public Radio reported that White House press secretary Sean Spicer confirmed to its reporter early Monday morning that they had arrived.Dunford invited Kushner and Homeland Security Adviser Thomas Bossert to receive an update on the campaign against the Islamic State, or ISIS, a spokesman for Dunford told reporters. They will be meeting with Iraqi, American and coalition officials.The spokesman, Navy Capt. Greg Hicks, also said that Kushner is “traveling on behalf of the president to express the president’s support and commitment to the government of Iraq and US personnel currently engaged in the campaign” against the Islamic State.Trump has charged Kushner with making peace between Israel and the Palestinians, and has involved him in other foreign policy issues. Kushner also has been tapped to lead a new White House office that would streamline the government, using ideas borrowed from the business world.