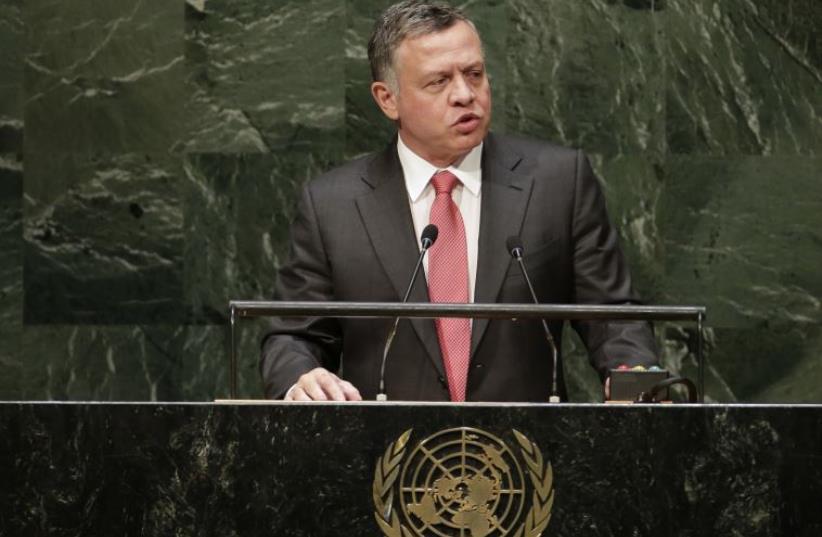 Jordan's King Abdullah addresses UN General Assembly
(photo credit: REUTERS)
Advertisement
AMMAN - Jordan will downgrade its diplomatic representation with Qatar, it said on Tuesday, after examining the "cause of the crisis" between Doha and several other Arab states.
Jordan also revoked the license of Doha-based TV channel Al Jazeera, government spokesman Mohammad al Momani said.Earlier in the day, the West African country of Mauritania, a member of the Arab League, also severed ties with Qatar over allegations it "supports terrorists," the state news agency reported."The state of Qatar has linked its policies ... in support of terrorist organizations and the propagation of extremist ideas," said the statement from the ministry of foreign affairs published in Arabic by the Mauritanian Information Agency. "This has resulted in heavy losses to human life in these Arab countries, in Europe and throughout the world."
Turkish President Tayyip Erdogan said on Tuesday that isolating Qatar, including the use of sanctions, would not resolve any problems, adding that Ankara would continue to do everything in its power to help end the crisis.
The Arab world's biggest powers cut ties with Qatar on Monday, accusing it of support for Islamist militants and Iran, reopening a festering wound two weeks after U.S. President Donald Trump's demand for Muslim states to fight terrorism.
In a speech following a fast-breaking iftar dinner for the Muslim holy month of Ramadan, Erdogan said Turkey will do everything to resolve the crisis.