Zuhair Mohamad Hassan Khalid al-Abassi, aka “Amjad Atta,” one of three suspects in the attack for whom France issued an international arrest warrant earlier this year, was arrested on June 1. 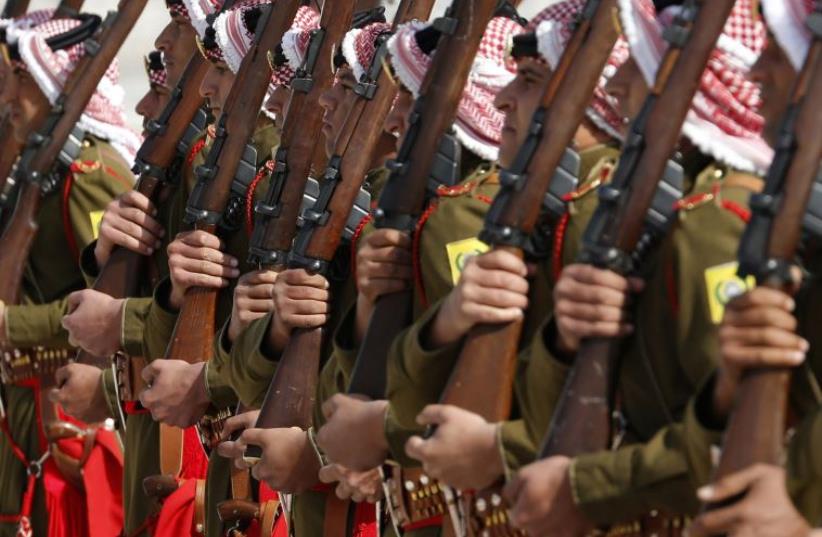 A Beduin honour guard marches at Amman airport
(photo credit: REUTERS)
Advertisement
France reportedly could have a difficult time extraditing the alleged organizer of a deadly 1982 terrorist attack who was arrested in Jordan earlier this month.An unidentified Jordanian source “close to the case” told the French news agency AFP on Thursday that his country rarely extradites its citizens, choosing instead to try them in “specialized Jordanian courts.”Zuhair Mohamad Hassan Khalid al-Abassi, aka “Amjad Atta,” one of three suspects in the attack for whom France issued an international arrest warrant earlier this year, was arrested on June 1. The attack was under the auspices of the Abu Nidal Organization, a Palestinian terrorist group.Abassi, 62 and of Palestinian origin, is today “an aging man who works in the construction sector,” the Jordanian source told AFP. The source added that al-Abassi appeared in court without a lawyer and was ordered to surrender his passport before being released on bail.According to AFP, Abassi was detained in the city of Zarqa, 18 miles northeast of Amman, the capital.France, which also issued international arrest warrants for two other suspects in the attack, has requested that he be extradited. A total of six people are believed to have participated in the attack on the Chez Jo Goldenberg eatery in the heavily Jewish Marais neighborhood of Paris.Six people were killed in the shootings by two gunmen who stormed the restaurant in the middle of the day and fired on customers. In addition to the six fatalities, 22 people were injured. Chez Jo Goldenberg closed in 2006.The other two suspects are living on the West Bank and in Norway.