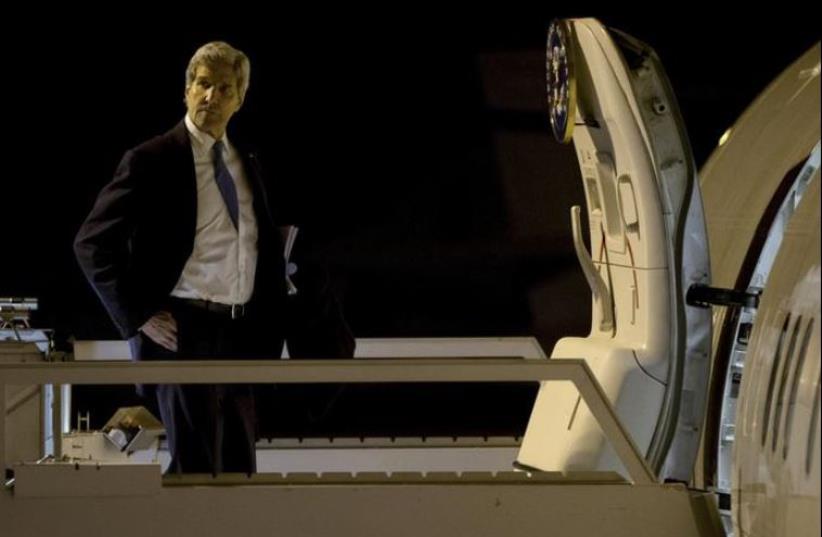 US Secretary of State John Kerry boards his plane to leave Zurich, Switzerland en route to Saudi Arabia, January 22, 2016.
(photo credit: REUTERS)
Advertisement
RIYADH - US Secretary of State John Kerry met Gulf Arab countries in Saudi Arabia on Saturday for talks aimed at pushing the Syrian peace process forward and calming their concern about the international agreement over Iran's nuclear program.Kerry began a stop in Riyadh by meeting with representatives of the six nations of the Gulf Cooperation Council, Saudi Arabia, Bahrain, Kuwait, Qatar, Oman and the United Arab Emirates.He is also due to have talks with Riad Hijab, chair of the Syrian opposition's High Negotiations Committee, which was formed in Saudi Arabia last month, amid uncertainty about whether Syrian peace talks slated to start next week in Geneva will take place.The Saudi-backed Syrian opposition ruled out even indirect negotiations with Damascus before preconditions are met, including a halt to Russian air strikes, contradicting Kerry's hopes for talks to start next week.The peace efforts are complicated by the worsening relations between Saudi Arabia and Iran, which back different sides in the Syrian conflict, and concern the Arab states have about how Tehran will benefit from implementation of a nuclear deal agreed with Western powers last year.Tensions between Saudi Arabia and Iran worsened this month after Riyadh's execution of a Shi'ite Muslim cleric triggered an attack by Iranian protesters on its Tehran embassy, leading the kingdom to cut diplomatic ties.A senior State Department official said before Kerry's arrival in Riyadh that Washington hoped Saudi Arabia would restore diplomatic ties with Iran after Iranian Supreme Leader Ayatollah Ali Khamenei's statement of regret this week over the embassy storming.The official said Kerry had emphasized to the Iranian and Saudi foreign ministers the importance of reconciliation and that Pakistani Prime Minister Nawaz Sharif, who visited Riyadh this week, also discussed this with Saudi authorities.However, he said the United States had no plans to engage on the issue of facilitating a Saudi-Iranian rapprochement, and that Washington - which has no diplomatic ties with Tehran - was not well placed to do so.Saudi Foreign Minister Adel al-Jubeir has said in several interviews this month that full relations cannot be restored until Iran changes its behavior and acts like a normal state rather than like "a revolution".Saudi Arabia and Iran each accuse the other of fomenting instability across the Middle East, and Riyadh regards Iran's backing for Shi'ite militias in Iraq, Syria, Lebanon and Yemen as a threat to its own security.