The expulsion displaced 150,000 Jews from the region, resulting in the death of hundreds of Jewish people and causing injury to thousands more. 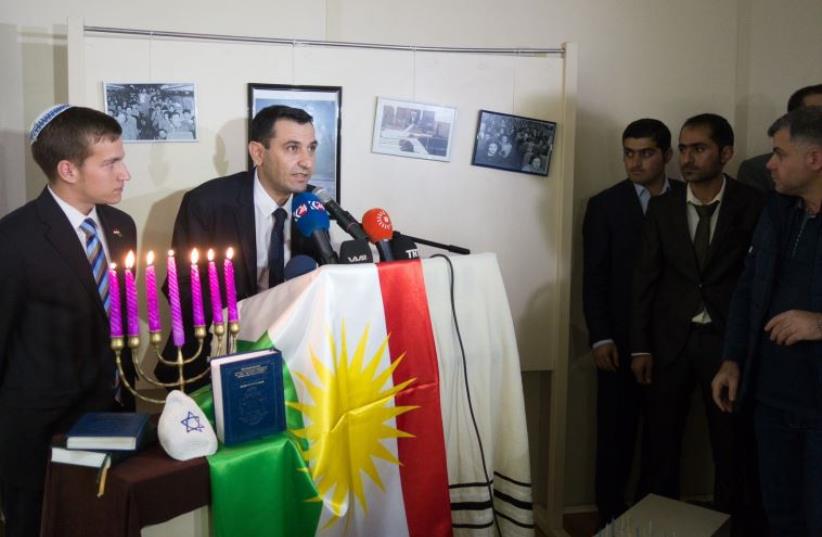 KRG Director of Jewish Affairs Sherzad Omer Mamsani addresses those gathered to commemorate 70 years since the Jewish expulsion from the Kurdish Region and Iraq.
(photo credit: Courtesy)
Advertisement
The Jewish Affairs Directorate of the Kurdistan Region Government (KRG) marked the 70th anniversary of the expulsion of Kurdish Jews by the Baghdad central government earlier this week in the Kurdish regional capitol of Erbil.The expulsion of the Jews began in 1941 and was carried out by the Iraqi Arab allies to the Nazi regime. The expulsion displaced 150,000 Jews from the region, resulting in the deaths of hundreds of Jewish people and causing injury to thousands more. Prominent dignitaries joined the memorial hosted by the Kurdish Regional Government Directorate of Jewish Affairs, a body dedicated to protecting the rights of Jews living in and visiting the KRG, restoring lost history, culture and places of worship, while pursuing reparations for the victims of the crimes of the Baghdad central government.The ceremony took place in the Shanidar Art and Cultural gallery which also marked the first time public showing of rare Jewish Kurdish art, photos and documents that tell the story of Jewish Kurdish history. "In a time where Jews and their businesses are increasingly unwelcome in allegedly tolerant, progressive Western nations, this sends a message to the world: against ISIS, we have the moral clarity in this war of barbarism versus humanity," Jewish Affairs Director Sherzad Omer Mamsani said before an audience of nearly 200 religious, political and public figures. "All faiths and all ethnicities are free and protected in Kurdistan," he addedThe ceremony closed with an emotional candle lighting ceremony where one candle was lit to mark each of the 70 years since the Jewish expulsion. The first to light were Jews hailing from Kurdistan, America and Israel, followed by representatives of different faiths and ethnicities including Zoroastrianism, Christianity, Yazidi, Islam, Baha'i, Mandean, Kakai, Shabbati, Assyrian, Chaldean, and Turkoman, who all came to stand in solidarity with the tragic Jewish experience.  Ahead of the memorial ceremony, American and Israeli guests met with Dr. Pushtiwan Sadiq, Minister of KRG Religious Affairs, who emphasized his deep commitment to restoring a vibrant Jewish presence to become as normal and widely accepted as Kurdistan's Muslim majority.