Walid Jumblatt, a member of Lebanon’s parliament and the head of the Progressive Socialist Party, says "I don’t want at any price the so-called help of the Israelis." 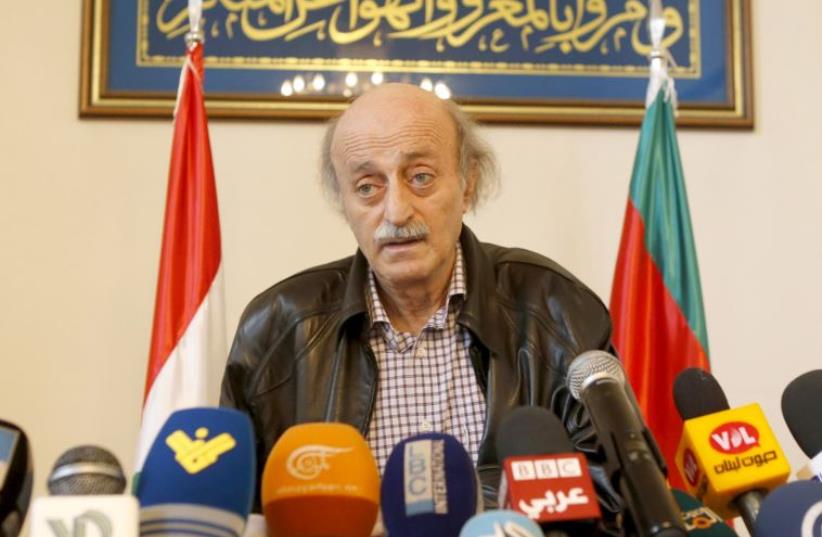 Walid Jumblatt
(photo credit: REUTERS)
Advertisement
The leader of Israel's Druse community in Lebanon, Walid Jumblatt, rejected on Sunday the idea that Israel could be a source of help for the Druse community in neighboring Syria which has come under threat recently by the advance of the Islamic State and the al-Qaida-linked Nusra Front. Speaking in an interview to air Sunday night on “Aaron Klein Investigative Radio” broadcast on New York’s AM 970 The Answer and Philadelphia’s NewsTalk 990 AM, Jumblatt stated,  “I don’t want at any price the so-called help of the Israelis who are playing a very dubious and suspicious role.”Jumblatt's comments came a week after Israeli Druse attacked an IDF ambulance carrying wounded Syrians for treatment in Israel, killing one person and wounding another. The attackers believed that the wounded Syrians were members of the Nusra Front, which are threatening the Druse community in the village of Hader, just over the border in the Syrian Golan Heights.
Security Analyst Yossi Melman on the Druze ambush and what"s behind it
Israel has rejected the claims that it is aiding the Nusra Front, but Jumblatt suggested that he believes the accusations are true.“The Israelis are welcoming wounded fighters and wounded people from the area of Quneitra. Some Arab brothers. But two days ago, an ambulance carrying wounded people, I don’t know why it was directed inside a Druse village inside Israel. And the Druse attacked this ambulance and killed one of the wounded, which is a horrible act. But this guy was (taken) not far away from the city of Hader in Syria, not far away from Mount Hermon, which would create more animosity between the Druse and the Sunnis. So this is why I say the Israeli play is very dubious and suspicious.”Jumblatt urged the Druse community in Hader to reconcile with the Syrian insurgents threatening their village. “It’s better to open reconciliation with the rebels because it’s an isolated village.” Some leaders of Israel's Druse community have called on Israel to provide aid to the embattled Druse of Syria.Prime Minister Benjamin Netanyahu said earlier this month that Israel is prepared to act to help Druse refugees from Syria.“We are vigilantly following all that is being done along our borders, and my instruction is to take all action necessary,” Netanyahu said in response to questions from MK Hamad Amer (Yisrael Beytenu), who is Druse.