Maria Maalouf, a controversial and outspoken Lebanese television reporter, tweeted that Israel should rid the world of Hassan Nasrallah and urged the country to execute an aerial attack targeting Hezbollah's leader. 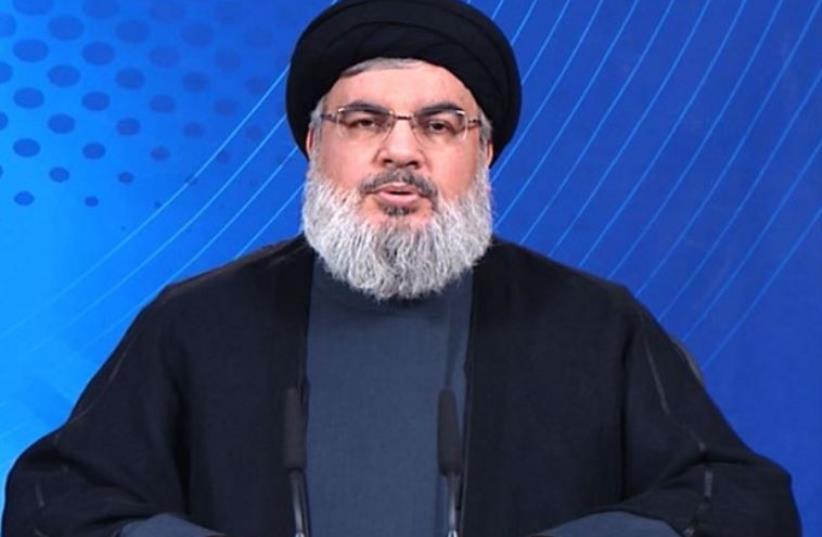 Hezbollah Secretary-General Hassan Nasrallah appears on Al-Manar television
(photo credit: AFP PHOTO)
Advertisement
Lebanese television reporter Maria Maalouf took to Twitter on Saturday night to urge Israel to make good on past threats and take out Hezbollah's leader, Hassan Nasrallah.
In two different tweets Maalouf published on her official Twitter handle late Saturday night, the reporter turned to the State of Israel and said that if the latter really wanted to see peace in the region, it ought to arrive at some sort of agreement with the Shi'ite terror organization.
"If Israel really wants peace, then it should prove it and sign on agreements with Hezbollah. Because, to this day we have not gotten rid of Hassan Nasrallah, who is deluding us in his fight against Israel," Maalouf wrote in her first tweet. Shortly after, Maalouf tweeted again, this time taunting Israel and claiming that it could not really deter its enemies if it didn't take more extreme measures. "If Israel sees Hassan Nasrallah as its enemy, why doesn't it carry out an air strike that would rid us of him, thus gaining our faith and protecting itself?" This second quote gained a lot of traction, triggering a heated debate among the reporter's 222,000 Twitter followers. Many lashed at Maalouf, who is known for her avid stand against the Syrian regime, while others reacted by saying that her suggestions couldn't possibly happen because "Israel and Hezbollah are on the same side," alluding to radical conspiracy theories claiming that Israel and Hezbollah are actually in contact and seeking collaboration behind the scenes. It appears that the timing of Maalouf's comments was a contributing factor in the sensation they sparked. In recent months many voices across the Lebanese political map have been raising a similar concern that Hezbollah could potentially cause a crisis in Lebanon due to its ongoing involvement in the Syrian Civil War alongside the Assad regime. This is not the first time Maalouf has made controversial statements, nor is it the first that she comes under the harsh fire of the critics. Last week the son of Syria's envoy to Jordan threatened to kill Maalouf, writing on his personal Facebook page that "we have the hanging rope ready for you" and making further threats on her life. In response, Maalouf called for Lebanese authorities to try the ambassador's son.Maalouf is considered one of the main central figures in the Lebanese media to actively speak out against Iran, Hezbollah's militias and Syrian President Bashar al-Assad's regime. Often drawing the ire of critics and television viewers, she is known for raising provocative questions and reporting sensitive stories regarding corruption among the Lebanese political elite.