Protesters blame political feuding and corruption for the failure to resolve the waste crisis that has in recent weeks left piles of uncollected trash festering in the summer sun. 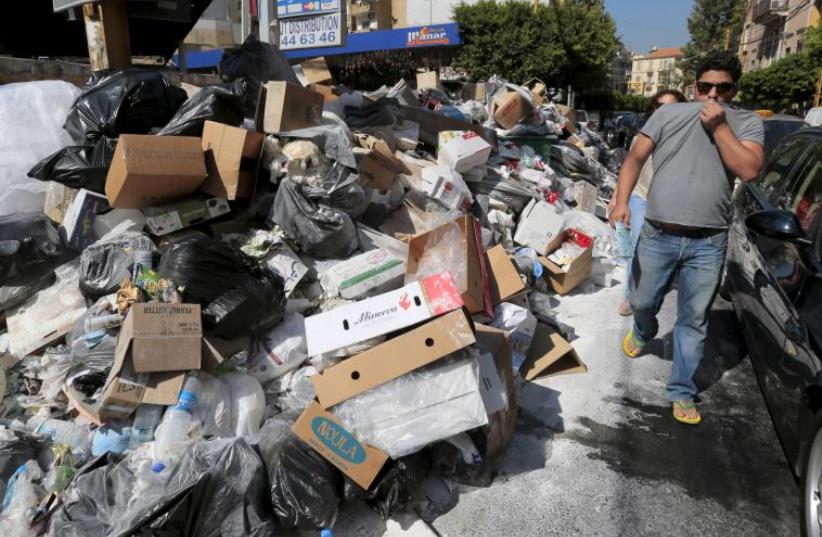 Trash pile in Beirut, Lebanon
(photo credit: REUTERS)
Advertisement
BEIRUT - Lebanese protesters postponed an anti-government demonstration set for Monday, after two days of rallies over uncollected garbage ignited fierce clashes and threatened the survival of the government, plunging Lebanon deeper into crisis.Simmering frustration at the protracted political deadlock has boiled over into raw anger. The fractured cabinet and parliament are paralyzed, the political class has been unable to agree on a new president for over a year and sectarian tension has been whipped up by the civil war across the border in Syria.The UN special coordinator for Lebanon urged "maximum restraint" by all sides in the protests.Organizers of the "You Stink" garbage campaign, mobilizing independently of the big sectarian parties that dominate Lebanese politics, said they would hold a news conference later to explain why they had postponed a third day of protest.Calm was restored on Monday, with security forces heavily deployed. Protesters had battled security forces late into Sunday night in central Beirut.The interior minister said 99 members of the security forces and 61 civilians had been injured in the events.They blame political feuding and corruption for the failure to resolve the waste crisis that has in recent weeks left piles of uncollected trash festering in the summer sun.The national unity government led by Prime Minister Tammam Salam has been mostly hamstrung since it came to office last year, paralyzed by rivalries among politicians that have been exacerbated by crises in the wider region.Salam, frustrated at the failings of his government, on Sunday threatened to resign, saying the bigger problem in the country was its "political garbage," in an attack on the politicians who are bickering over top security posts.Sigrid Kaag, the UN coordinator, in a statement called for cabinet to resolve the crisis as quickly as possible. "The Special Coordinator underlined the importance of effective and urgent decision-making by the Cabinet," the statement said.Security forces used water cannons and tear gas against demonstrators, some of whom threw stones and sticks at riot police during battles in central Beirut on Sunday. The organizers have blamed the violence on troublemakers who they believe are connected to rival sectarian parties."Lebanon on brink of chaos," the headline of the Daily Star newspaper said. "Infiltrators hijack the You Stink revolution," said the An-Nahar newspaper. The As-Safir newspaper called it "the Aug. 22 Intifada," or uprising.

BREAKING POINTConflict in the Middle East, including the war in neighboring Syria, has strained Lebanon's sectarian system of government to breaking point. The presidency reserved for a Christian has been left vacant for a year and parliamentary elections have been postponed.The Salam cabinet, formed last year with the blessing of regional rivals Saudi Arabia and Iran, has avoided a complete vacuum in the executive arm. It groups rival Lebanese parties including the Future movement led by Sunni politician Saad al-Hariri, Shi'ite Hezbollah, and competing Christians.But it has struggled to take even basic decisions, including agreeing a plan for Beirut's waste when the city's garbage dump was shut last month. Rubbish collection has resumed in some areas, but there has been no decision on a permanent solution.Tension in cabinet has escalated in recent weeks over appointments in the security agencies and army.In the absence of any broad deal on who should replace outgoing security chiefs, the terms of incumbents including army commander General Jean Kahwaji were extended in recent weeks.That has infuriated one of the main Christian parties, the Free Patriotic Movement led by Michel Aoun, an ally of the powerful Hezbollah. Aoun is seeking the appointment of his son-in-law, a top army commander, as the next army chief.The Free Patriotic Movement accuses Salam of usurping presidential powers but it has not quit his cabinet.Salam's threat to resign has fueled concern of a bigger crisis. He said that if a cabinet meeting scheduled for Thursday was not productive on issues including a tender to decide on a new refuse collection company, "there would be no necessity for the government after it."Should it collapse, his government would stay on in the caretaker capacity. However, his resignation would trigger a constitutional crisis because in Lebanon it is the president who appoints the prime minister.Salam also warned the heavily indebted government would be unable to pay salaries next month. Unable to issue new debt, he said Lebanon risked being classified "among the failing states."Lebanon's public debt currently stands at about 143 percent of gross domestic product, a government source said.
Lebanese reporter attacked at Beirut protests
Still rebuilding from its 1975-1990 civil war, Lebanon has been repeatedly jolted by spillover from the Syria war, including political violence and a major refugee crisis.