Islamic State has formed hubs of activity in the pockets of instability that have been created because of weak state control over territories. 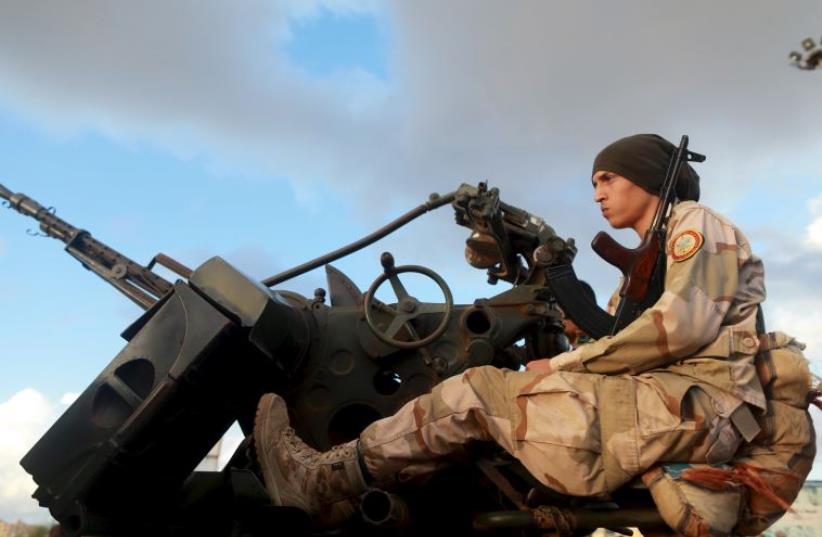 One of the members of the military protecting a demonstration against candidates for a national unity government
(photo credit: REUTERS)
Advertisement
Analysts have underestimated the importance of Libya’s role in aggravating political and military chaos in its Arab and African environs, according to an Israeli political science professor.According to Prof. Yehudit Ronen of the political science department at Bar-Ilan University, Libya is also affecting the European migrant crisis and Islamic State’s impact beyond Libya’s borders, such as to Sinai.“The Libyan conflict is spinning in two maelstroms of war: The deeply rifted internal Libyan political struggle and Islamic State’s military campaign to expand its ideological and political hegemony in the country,” said Ronen on Monday.Islamic State has formed hubs of activity in the pockets of instability that have been created because of weak state control over territories.And for this reason, Islamic State has not been a threat to Israel, which has the strongest security forces in the region.Islamic State is traversing the region’s collapsing borders and flowing between its various centers of operation – from Nigeria to Libya to Egypt, and Gaza.According to recent reports, Nigeria’s Boko Haram, which has waged a campaign to carve out an Islamist state in northern Nigeria and pledged loyalty to Islamic State, has used migratory routes to transfer jihadists and military equipment to Libya.Indicative of the group’s growing position in the region, late last year, Ansar Bayt al-Maqdis jihadist organization renamed itself Sinai Province after pledging allegiance to Islamic State. “We are witnessing the deepening consolidation of Islamic State in Libya and it is becoming one of the main players in the Libyan conflict arena,” said Ronen.She said the impact of this has strengthened other jihadist movements such as in Sinai, which has brought a raging Islamist insurgency close to Israel’s border.“The peninsula’s expanses have been remote from direct security eyes – Egyptian and Israeli – for years now, because of its various topographical constraints and vast territory that offer countless places to hide arms, jihadists and their military exercises, and because of the political and military restrictions (lessened in 2013) imposed by the Egyptian–Israeli peace agreement,” wrote Ronen in an article last year in the journal Israel Affairs titled, “The effects of the ‘Arab Spring’ on Israel’s geostrategic and security environment: the escalating jihadist terror in the Sinai Peninsula.”Islamic State’s branch in Libya formed toward the end of 2014 and in a relatively short period of time has been able to have a large impact on the country and its regional and international circles, she said.The terrorist group entrenched itself in Sirte, which is located in the middle of the coastal Mediterranean strip in northern Libya. This strip is where most of the population lives and is one of the major routes migrants are using to illegally cross into “Europe’s paradise.”By controlling Sirte and its environs, Islamic State is able to recruit from the migrants and even reportedly use them as cover to get sleeper cells into Europe, she explained.Reuters contributed to this report.