Boxes of evidence have rested in the archives of the Armenian Patriarchate of Jerusalem for nearly a century, inaccessible to scholars "for reasons that are not entirely clear." 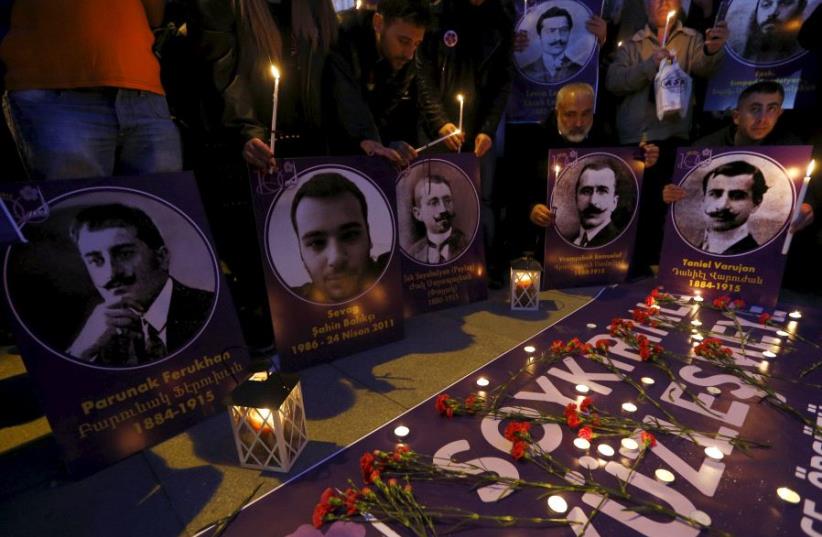 Demonstrators hold candles and pictures of Armenian victims during a commemoration for the victims of mass killings of Armenians by Ottoman Turks in the Armenian Genocide, in Istanbul April 23, 2015.
(photo credit: REUTERS)
Advertisement
Lost evidence was recently recovered in a Jerusalem archive that researchers have called “smoking gun” proof of the Armenian Genocide by Ottoman Turkey.The New York Times reported on Saturday that Taner Akcam, a Turkish historian at Clark University in Worcester, Massachusetts, came upon an original telegram from the military tribunals that initially convicted the genocide’s planners. This key evidence has long been missing, and the lack of original documents, the Times said, is the foundation of the Turkish narrative of denying the genocide.“Until recently, the smoking gun was missing,” Akcam told the Times. “This is the smoking gun.”
Pope Francis calls Armenian massacre "first genocide of 20th century"
The telegram, in code, is from Behaeddin Shakir, a high-ranking Ottoman official, to a colleague, inquiring about specifics regarding the deportation and murder of Armenians in eastern Anatolia. A copy of this telegram was used in Shakir’s conviction, shortly before almost all original documents and testimony went missing, forcing scholars to rely on secondary sources for their research on the topic.According to the Times, Armenian leadership in Istanbul shipped 24 boxes of records to England when Turkish nationalists were seizing control of the country in 1922. The documents then made their way to France in the care of a bishop and finally to the archive of the Armenian Patriarchate of Jerusalem, where they’ve remained since the 1930s, inaccessible to scholars “for reasons that are not entirely clear.”Akcam came upon photographs of the original telegram in New York, where they were in the possession of the nephew of a deceased Armenian monk.Last year, the Knesset Education, Culture and Sports Committee announced recognition of the Armenian Genocide.“It is our moral obligation to recognize the holocaust of the Armenian nation,” committee chairman MK Ya’acov Margi (Shas) said.Georgette Avakian, chairwoman of the Armenian National Committee in Jerusalem, told the Knesset committee that after 101 years, the time has come for the Knesset to join parliaments around the world and the 31 countries who have already recognized the Armenian Genocide.MK Zehava Gal-On (Meretz), who initiated the committee meeting, said, “Each year we instill false hope in the people who are sitting here. It dishonors the Knesset to continue to go on and on about this issue, year after year, without reaching a decision that the State of Israel and the Israeli legislature recognize the genocide of the Armenian people.”Lidar Gravé-Lazi contributed to this report.