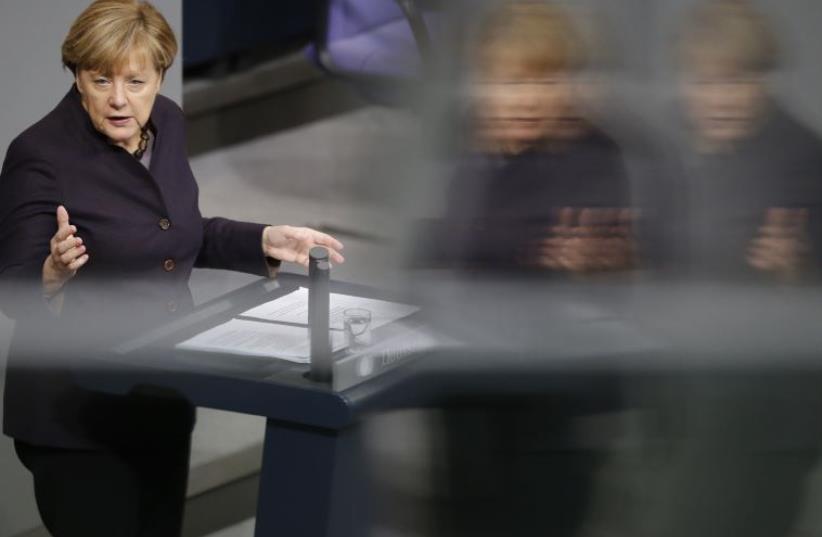 German Chancellor Angela Merkel addresses a session of the German lower house of parliament, the Bundestag, in Berlin
(photo credit: REUTERS)
Advertisement
The German government rebuked its own foreign intelligence agency, the BND, on Thursday for suggesting that Saudi Arabia was becoming more "impulsive" in its foreign policy.In an unusual public statement on Wednesday, the BND also said Saudi Arabia - the world's No. 1 oil exporter - was losing confidence in the United States as a guarantor of Middle East order and that Riyadh therefore appeared ready to take more risks in its regional competition with Iran."The assessment, in this case made public, does not reflect the stance of the government," a spokesman for Chancellor Angela Merkel said, adding that Berlin viewed Saudi Arabia as an important ally in a region shaken by crisis.A diplomat at the Foreign Ministry, speaking on condition of anonymity, was more frank."The BND surely does not speak for German foreign policy, especially not via third parties," said the diplomat, referring to the circumstances of the BND publication.The spy agency issued the 1-1/2 page report, entitled "Saudi Arabia - Sunni regional power torn between foreign policy paradigm change and domestic policy consolidation", to some German media. Reuters also obtained a copy."The BND is supposed to provide the government with intelligence and hopefully smart analysis", the diplomat said, adding that Saudi Arabia had an important role to play in international efforts to find a political solution in Syria.The diplomat said Saudi Arabia had been irritated by the BND report, adding: "Of course, something like this draws a reaction. We are communicating with the Saudi Arabian government at various levels."Contacted by Reuters, the BND declined to comment on the matter.Since King Salman succeeded to power in January, Saudi Arabia has orchestrated a military coalition to intervene in neighbouring Yemen to limit Iranian influence, increased support for Syrian rebels battling President Bashar al-Assad's forces and has made big changes in the royal succession.Riyadh has long viewed Iran as aggressive and expansionary and regarded its use of non-state proxies such as Lebanon's Hezbollah and Iraqi Shi'ite militias as aggravating sectarian tensions and destabilising the region.However, under Salman it has moved more assertively to counter its regional foe.