'Messed up': EU solidarity frays as dignitaries snipe at each other at conference

The tension in the calm of wealthy Luxembourg, which is holding the EU's presidency, drove home how far the 28-nation bloc remains from a common response to the migrant crisis. 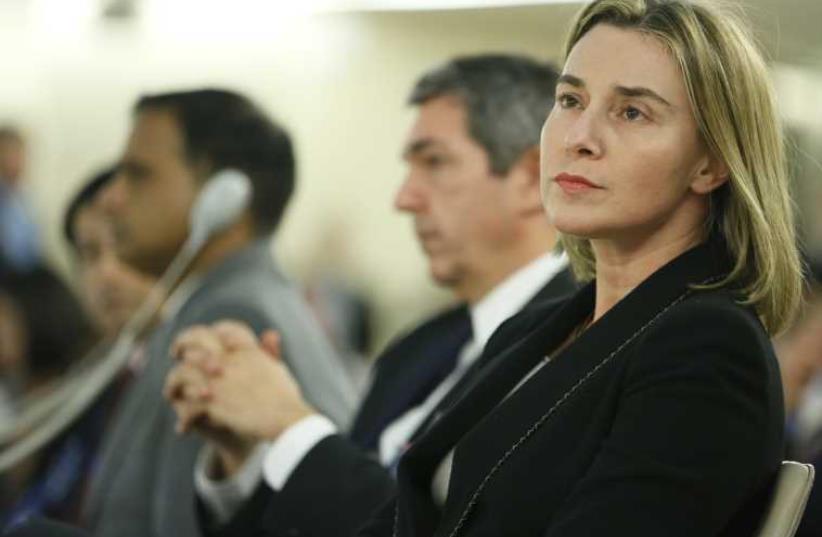 European Union foreign policy chief Federica Mogherini prepares to address the 28th Session of the Human Rights Council at the United Nations in Geneva
(photo credit: REUTERS)
Advertisement
As European foreign ministers stepped out of their black cars for a weekend gathering in Luxembourg, the conviviality of the previous evening at the Grand Duke's reception evaporated at the news of migrants pouring out of Hungary into Austria."This has to be an eye opener how messed up the situation in Europe is now," Austria's Sebastian Kurz told reporters in unusually blunt comments, moments after Peter Szijjarto, his Hungarian counterpart, blamed the "irresponsible statements" of EU politicians on the migrant crisis. His was a thinly veiled jab at Austrian and German plans to welcome many more refugees.The tension in the calm of wealthy Luxembourg, which is holding the EU's presidency, drove home how far the 28-nation bloc remains from a common response to the migrant crisis.Ministers seemed at times in disarray, as Slovakia's foreign minister publicly rejected a proposal by his own interior minister made back in Prague that a train corridor could be set up for migrants traveling to Germany from Hungary.Behind closed doors in the cavernous conference room, diplomats said the discussion often went round in circles and calls for additional high-level meetings were played down by the meeting's chair, EU foreign policy chief Federica Mogherini."I have to admit that the discussion today was a difficult one," Mogherini told a news conference.Despite German Chancellor Angela Merkel's warning that the migrant crisis is now more serious than the Greek debt crisis that threatened to break up the euro zone, there was no agreement on which practical steps to take first.At a time of high unemployment in Europe and the rise of anti-immigration parties, ministers could not find common ground on whether emergency management centers to process asylum requests, known as hotspots, should be set up in countries outside the EU.It also remains unclear when the hotspots envisaged within the EU should be operational.Italy, which says it is being left to deal with migrants coming across the Mediterranean, wants hotpots to be set up after EU countries start taking in refugees who are already in the country, part of the plan agreed in July and which needs European Parliament approval.A revised plan to be presented by the European Commission next week is expected to set quotas for countries to take in asylum seekers from countries such as Greece, Hungary and Italy. But EU states remained deeply divided on this issue."Within the EU there are still countries who believe they can solve the problem by off-loading responsibilities to other countries," Italian Foreign Minister Paolo Gentiloni said."There are countries who raise walls and do not want to contribute in the solidarity towards migrants, but we cannot afford such approach," he said.Hungary, which is building a fence on its border with Serbia, has emerged as the primary entry point for refugees hoping to reach Germany, Britain and Sweden.Other countries, such as Slovakia and the Czech Republic, insist that imposing a quota of refugees from the Middle East for small, predominantly white, Christian countries was pointless because migrants would not stay and try to integrate.Three-quarters of refugees granted asylum in Slovakia last year left the country, probably for Germany, one official said.Mogherini, who is Italian, sought to play up the EU's unity after the meeting ended, but also said it was time countries accepted that there was no way out of the issue."We are all facing a dramatic event ... The sooner we accept this, psychologically and politically, the sooner we will be able to respond in an effective way," she said.