"Lebanese media often help enshrine the idea that men can get away with these crimes," said Hayat Mirshad, co-director at Fe-Male, a local feminist group. 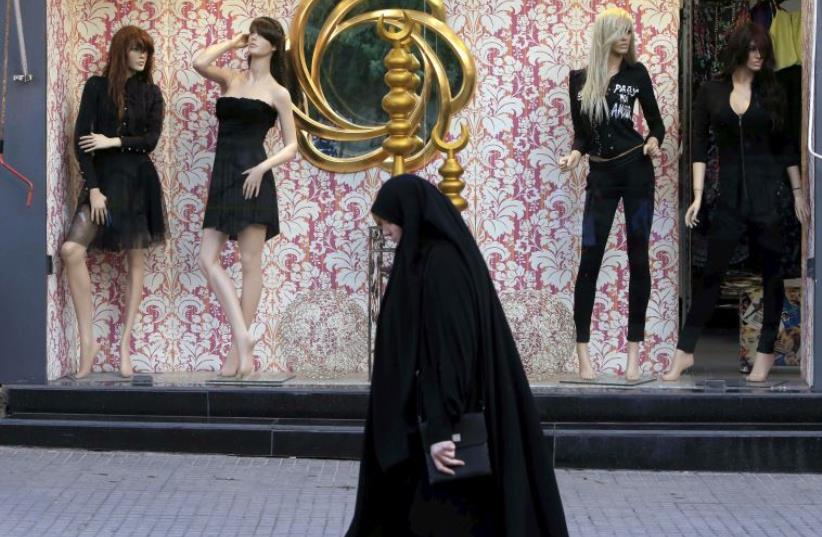 Woman wearing an abaya walks past a fashion clothing store in Lebanon
(photo credit: REUTERS)
Advertisement
The murder of three women has provoked outrage in Lebanon, as authorities revealed a doubling of domestic abuse reports in a country that recently won praise for new laws to protect women.
The most high-profile death was that of model Zeina Kanjo, who was strangled at home. An arrest warrant has been issued for her husband, who was charged with her murder after fleeing to Turkey, according to the state-run National News Agency (NNA).
A local news channel invited Kanjo's husband, Ibrahim Ghazal, on to share his version of events, triggering anger on social media over what many see as a culture of victim blaming.
"Lebanese media often help enshrine the idea that men can get away with these crimes," said Hayat Mirshad, co-director at Fe-Male, a local feminist group.
"(Ghazal) said on the show that if he didn't want to get arrested, he wouldn't be."
Lebanon outlawed sexual harassment and reformed its domestic violence law in December but it does not criminalise marital rape and personal laws administered by religious courts discriminate against women in matters like divorce and child custody.
The United Nations has described a global increase in domestic abuse during coronavirus lockdowns as a "shadow pandemic", with a spiralling economic crisis worsening violence in homes in Lebanon, according to women's rights groups.
In new figures shared with the Thomson Reuters Foundation on Wednesday, the Internal Security Forces (ISF) said domestic violence reports doubled last year, with 1,468 cases received in the last 12 months, up from 747 during the previous year.
The number of women killed during domestic violence also increased but the exact figure has not yet been finalised, said the ISF official, who declined to be named because they were not authorised to speak to the media.
The official figures reflect a similar trend to that noted by ABAAD, a women's rights organization, which saw calls to its helpline triple to 4,127 in 2020, up from 1,375 in 2019.
CRIMES
The second murder to make the headlines this month was of a woman in her 50s who was killed by a man who was trying to sexually assault her, the ISF said in a statement, adding that it had arrested a teenage male relative who had confessed.
Widad Hassoun, a middle-aged woman, was also found dead in northern Lebanon after being strangled, according to Fe-Male's feminist website Sharika wa Laken website.
"These crimes should not be seen as isolated incidents," said Mirshad of Fe-Male.
"They are part of a series of crimes enacted every day against women and girls because of the patriarchal system and a mentality that justifies these crimes."
Women's rights activists welcomed Lebanon's amendment in December of its 2014 domestic violence law to include violence "resulting from" marriage, but local lawyers say it is unclear if this applies to divorced women, leaving a legal loophole.
"We've seen many cases where men divorce women after they abuse them" to escape prosecution in civil courts, said Manal Majed, a lawyer with the Lebanese Women Democratic Gathering, a women's rights group.
"Women still have few protections from aggressors in positions of power over them."