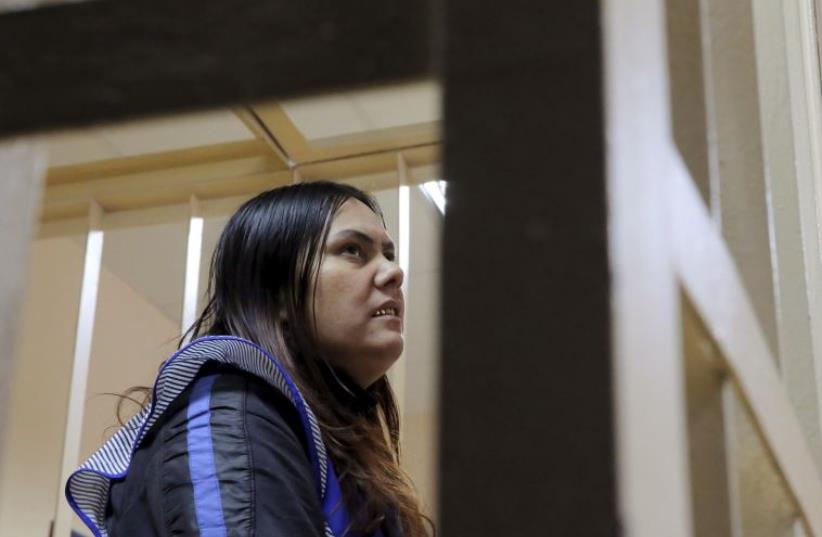 Gulchekhra Bobokulova, a nanny suspected of murdering a child in her care, looks on inside a defendants' cage as she attends a court hearing in Moscow, Russia, March 2, 2016.
(photo credit: REUTERS)
Advertisement
MOSCOW - A woman suspected of beheading a child in her care before brandishing the severed head outside a Moscow metro station has said she acted to avenge Muslims killed in the Kremlin's campaign of air strikes in Syria.In video footage posted online on Thursday and circulated by several prominent bloggers, the woman, 38-year-old Gulchekhra Bobokulova of Muslim-majority Uzbekistan, gave her first detailed explanation of an incident which state TV channels chose not to report."I took revenge against those who spilled blood," Bobokulova told someone asking her questions off camera. "Putin spilled blood, planes carried out bombings. Why are Muslims being killed? They also want to live."It was not clear when the video was filmed, but Bobokulova was wearing the same clothes as during a court appearance on Wednesday.A Kremlin spokesman said that remarks by the woman should be regarded as those of someone who is mentally unsound."I may be wrong. I'm not an expert or a judge but it is obvious that we are definitely talking about a woman who is mentally unsound," Dmitry Peskov, the spokesman, told reporters. "You need to regard anything that such a deranged woman says accordingly." The Kremlin launched its campaign of air strikes in Syria on Sept. 30 in support of President Bashar Assad, an intervention that altered the course of the conflict there.A Russian passenger plane was blown out of the skies above Egypt on Oct. 31 killing all 224 people onboard. Islamic State said it had carried out the attack in revenge for Russia's Syria campaign.Police on Monday wrestled to the ground Bobokulova, who had been working as a nanny for a Moscow family, after she wandered around a Moscow street holding the infant's severed head in the air and shouting Islamist slogans.The child she is suspected of murdering was a 4-year-old girl.Investigators in what the Russian media have dubbed the case of "the bloody nanny" quickly raised the possibility that Bobokulova was mentally ill. They have not made any mention of suspecting her of any terrorism-related offense.On Wednesday, she told reporters Allah had ordered her to commit the grisly crime.In the same video, she said she had wanted to relocate to Syria but had lacked the money to do so.Russia's Investigative Committee was not immediately available to comment.