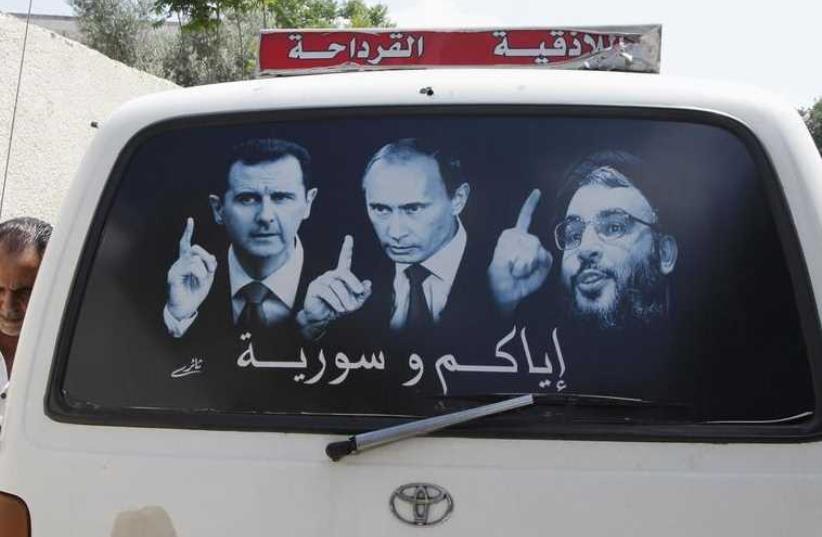 A poster showing Syrian President Bashar Assad (L), Russian President Vladimir Putin (C) and Lebanese Hezbollah leader Hassan Nasrallah is seen on a micro bus near Latakia
(photo credit: REUTERS)
Advertisement
Lebanese Shi'ite group Hezbollah on Friday welcomed Russia's military buildup in Syria in support of common ally President Bashar Assad, saying it was the failure of a US-led campaign against Islamic State that had forced Moscow's hand.Hezbollah leader Hassan Nasrallah said in an interview with the group's al-Manar TV that increased Russian support for Assad included highly advanced weapons systems, warplanes and helicopters.He also confirmed that a localized ceasefire agreement had been struck in two areas of Syria, where Hezbollah is fighting alongside government forces against an array of insurgent groups including Islamic State and al-Qaida.Nasrallah, in a wide-ranging interview that was his first media appearance since Russia's recent military buildup hit headlines, said Washington's own campaign against ISIS had failed,"(President Barack) Obama's strategy in confronting Daesh and terrorism has failed," he said, using an acronym for IS.He said that relying solely on air strikes would not defeat the jihadists and that US efforts to recruit and train so-called moderate Syrian rebels to fight on the ground were evidence of a "devastating failure" by its anti-ISIS coalition.It was this failure that had prompted Russia to step up military aid to Damascus, he said, after Moscow sent Assad hardware including fighter jets and personnel which it has described as "experts"."We welcome any force which intervenes and supports the front in Syria, because through its participation, it will contribute to pushing away the major dangers that are threatening Syria and the region," Nasrallah said.Russia insists Assad must be included in the international campaign against Islamic State, but the United States opposes this, saying the Syrian president is part of the problem.Nasrallah said the military hardware sent by Moscow was "very advanced" and included warplanes, helicopters and precision missiles.