Normal ties between Iran and US unlikely despite nuclear deal

"We cannot expect embassies to be reopened in Tehran and Washington...but we will continue to share information," says Iranian official. 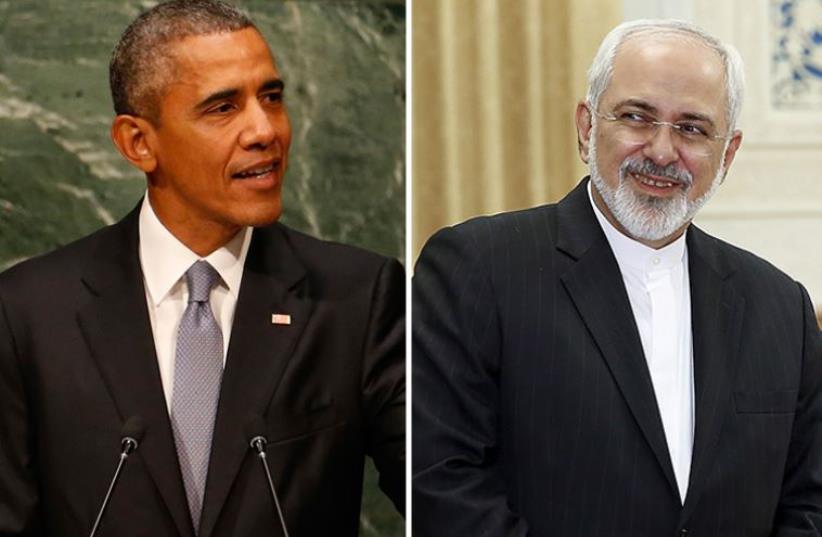 Obama and Zarif
(photo credit: REUTERS)
Advertisement
UNITED NATIONS- Iran is unlikely to normalize relations with the United States despite a landmark nuclear deal reached with America and other major powers and the first handshake between a US president and a high-ranking Iranian official in more than 30 years.
Pragmatist President Hassan Rouhani, whose 2013 election paved the way for Iran's diplomatic thaw with the West, has signaled his willingness to improve ties with "the Great Satan" and to discuss the regional crisis with the United States.
But analysts and officials say this improvement will go no further than an exchange of intelligence between the two nations through back-channels and that Supreme Leader Ayatollah Ali Khamenei has no intention of restoring diplomatic ties.
In a dramatic shift in tone between Iran and the United States, President Barack Obama and Iranian Foreign Minister Mohammad Javad Zarif shook hands at the United Nations on Monday. An Iranian official said it "was not preplanned."
But Iran's most powerful authority who has the last say on all state matters, including relations with Washington, is Khamenei and not Rouhani.
Khamenei has continued to denounce the United States publicly, suggesting that antagonism prevailing between Iran and the United States since the 1979 Islamic revolution in Tehran will not abate because of the nuclear deal. Iran and the United States severed diplomatic ties shortly after the revolution.
"How can you trust your long-time enemy? How can you do business with a partner you don't trust? We trust American people but not their government. And the deal has not changed it," said a senior, hard-line security official in Tehran.
"Real believers in Iran's revolution and its pillars and followers of our late leader (Ayatollah Ruhollah) Khomeini will never accept it."
Khamenei has backed Rouhani's efforts to reach the deal, under which Iran will curb its nuclear work in return for the lifting of sanctions which have severely damaged the economy.
"But he will never accept normalization of ties with America," a senior Iranian diplomat, who declined to be named, said. "For the leader it is just a non-negotiable red line."
Khamenei's hard-line loyalists, drawn from among Islamists and Revolutionary Guards, fear that normalization of ties with the United States might weaken their position.
"Restoring ties with the United States, which Rouhani and his camp are in favor of, poses an existential threat to hard-liners. If it happens, Rouhani's power and popularity will surpass Khamenei's," said political analyst Hamid Farahvashian.
PRESERVING BALANCE
But Khamenei, since taking over in 1989 from Khomeini, has been adept at ensuring that no group, even hard-liners, gain enough momentum to challenge the power of the Islamic Republic's second supreme leader.
"The leader strongly believes in America's devilish intentions. He will never approve normalization of ties with America," said a Khamenei relative, who asked not to be named.
Easing economic sanctions and ending Iran's isolation will bolster Rouhani's position within Iran's complex power structure, analysts said. Iranians could reward pro-Rouhani candidates at the ballot box in February elections for parliament and for the Assembly of Experts, a clerical body with nominal power over the supreme leader, analysts say.
A senior US official said that Khamenei was "very savvy" about holding on to the power that he has.
"Iran has politics ... I think he lets those politics play out. The revolution is still very present in that country and the tenets of that revolution," US lead nuclear negotiator and under-secretary of state, Wendy Sherman, said.
Some analysts argued that Rouhani was not seeking normalization of ties. "At best, it amounts to détente," said senior Iran analyst Ali Vaez from International Crisis Group.
"For Ayatollah Khamenei the nuclear accord was purely transactional, not transformational ... Neither President Rouhani nor any other actor in the Islamic Republic will be able to successfully challenge this vision."
EXCHANGE OF INTELLIGENCE
However, Iran and the United States will continue to cooperate through back-channels on regional issues aimed at reducing conflict in the Middle East, officials and analysts say.
"We cannot expect embassies to be reopened in Tehran and Washington ... but we will continue to share information about Iraq, Syria and other regional common interests. We have done it in the past," said an Iranian official, who asked not to be named.
Tehran and Washington have common interests and threats across the Middle East and they have cooperated tactically in the past, including when Iran helped the United States to counter al-Qaida in Afghanistan and Islamic State in Iraq.
Ali Ansari, director of the Institute of Iranian Studies at the University of St. Andrews, said, "There will be more informal exploration of collaboration on a case-by-case basis before normalizing relations is given serious consideration."
Iran continues to support Islamist militant groups such as Hezbollah, a close ally -- like Iran -- of Syrian President Bashar al-Assad in his war with rebels trying to overthrow him.
"One of those issues where we disagree very strongly with Iran where it may make sense to have some kind of discussions is Syria," Sherman said, adding that issues in Syria were "staggeringly complex, difficult and can't be reduced to a simple answer."
Sherman doubted that relations will improve any time soon. The Iranian official agreed. "Normalization of ties seems impossible at least in the near future. But who knows what will happen in 10 years," he said.

Tags us iran
Advertisement
Subscribe for our daily newsletter