"We see the lifting of sanctions more as an opportunity than as a threat," local businessman says. 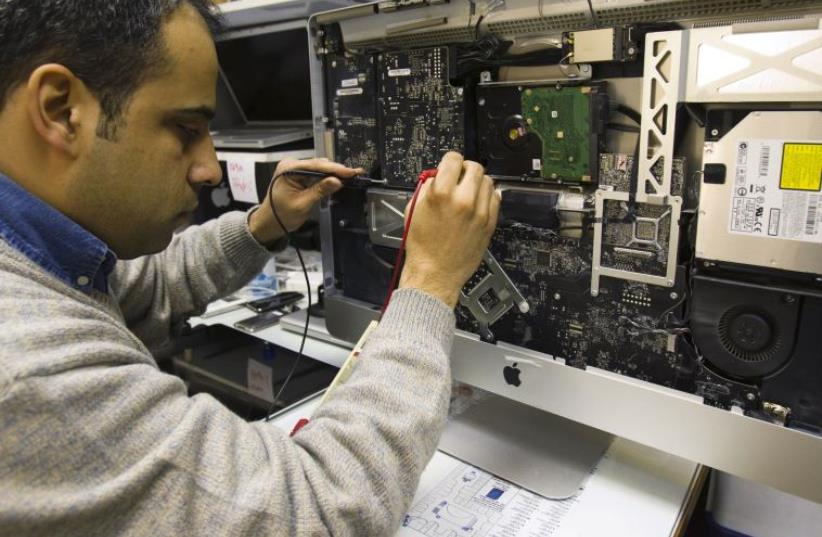 A man repairs an iMac in a shop at a mobile and computer shopping complex in northern Tehran January 18, 2011
(photo credit: REUTERS)
Advertisement
DUBAI - Tehran-based e-commerce firm Takhfifan found it impossible to attract foreign investment when it launched in 2011 but it took only two days for a potential foreign investor to get in touch after sanctions on Iran were lifted."When I was launching my company I talked to several foreign investors but none of them was interested in doing any business with Iran," the company's 32-year-old founder, Nazanin Daneshvar, said in a telephone interview on Tuesday."There are now VCs (venture capital firms) that are ready to sign contracts with us."Daneshvar declined to name the European company that had expressed interest in her company but said a deal, if it went ahead, would be that firm's first investment in Iran.The United States, European Union and United Nations on Saturday lifted international sanctions imposed over Iran's nuclear program.The move has caused huge excitement in the community of dotcom entrepreneurs who set up online businesses in the Islamic Republic, some of which are growing rapidly, despite international isolation and a slumping economy.They could now face tougher competition as foreign companies, with deeper pockets and more sophisticated technology, enter Iran's market of almost 80 million people.But the Iranian ventures, which are believed to number in the dozens, also see new opportunities: Now that sanctions are no longer stifling the economy, they expect a consumer boom and some hope to obtain foreign partners and funding.Many say they do not fear foreign competition because they believe foreigners will need local assistance to negotiate obstacles such as Iran's complex bureaucracy, sometimes erratic Internet service and cultural differences."Experience shows the international companies that tried to launch their business in Iran without the help of local entrepreneurs failed, or did not achieve what they expected," said Daneshvar.Also, some US sanctions on Iran will remain, which could make American tech giants more wary of entering the country, even though the US Treasury has said it will allow foreign subsidiaries of American firms to deal with Iran.Daneshvar founded Takhfifan - meaning "discounts" in Farsi -- after learning about the model used Groupon, a global e-commerce marketplace that connects millions of subscribers, when she was working in Germany as an information technology manager.Her company says it now has over 100 employees, more than 1 million active subscribers and contracts with 10,000 merchants in Tehran.START-UPSMany of the Iranian dotcoms resemble well-known US tech firms, with adjustments to suit Iran's business conditions. For example, Takhfifan asks corporate clients to offer discounts to customers and charges a commission.There is also an Iranian version of online retailer Amazon , named Digikala, and a local incarnation of ride-hailing service Uber, named Snapp."Iran's economic recovery could significantly boost our business. More money would only mean more consumers," said Ilia Vakili, 32, Snapp's chief technology officer, a graduate of Tehran's prestigious Shahid Beheshti University who began programming computers as a boy."We are interested in meeting potential new partners and/or investors, in the local market or abroad."Founded in late 2014, the company says it has nearly 100 staff and tens of thousands of people use its homegrown app.Eventually, Snapp may seek to expand internationally, Vakili said, sounding like a Silicon Valley start-up investor as he discussed business metrics, the strength of his pricing algorithm and the need to maintain service quality.Hamid Mohammadi, 36, who founded Digikala eight years ago, said the end of sanctions could benefit his firm by making it easier for top foreign brands to sell their products in Iran."Our main challenge during the sanctions was that the main brands were not directly present in Iran. The imports were taking place through non-transparent channels, and Digikala, as a retailer, couldn't create a successful partnership with international brands," he said.Some brands, especially South Korean ones such as Samsung and LG, eventually had success by establishing operations in Iran. "It was much easier to work with them compared to Apple, which despite high demand, could not provide a sustainable supply chain or customer service in Iran," Mohammedi said.That may now start to change. "I think after the lifting of sanctions the purchasing behavior of the Iranian consumers will be more similar to the international market," he said.Digikala says it employs 900 people and processes 10,000 orders a day, but that with online shopping still accounting for less than 1 percent of retail sales in Iran, it has plenty of room to grow. Mohammadi said he would welcome investment in his firm by "strategic and credible" firms.International banks are expected to move into Iran only slowly, partly because of the risk of falling foul of the US sanctions that are still in place. But Mohammadi said that when they did enter, credit-card use could take off, and this would revolutionize online shopping in Iran."We see the lifting of sanctions more as an opportunity than as a threat. We are so established in Iran's e-commerce ecosystem that it would be very difficult for international companies to compete with us," he said.