Obama and Kerry decide to support Erdogan amid coup d'etat

Obama and Kerry announce their support of Erdogan amid coup in Turkey. 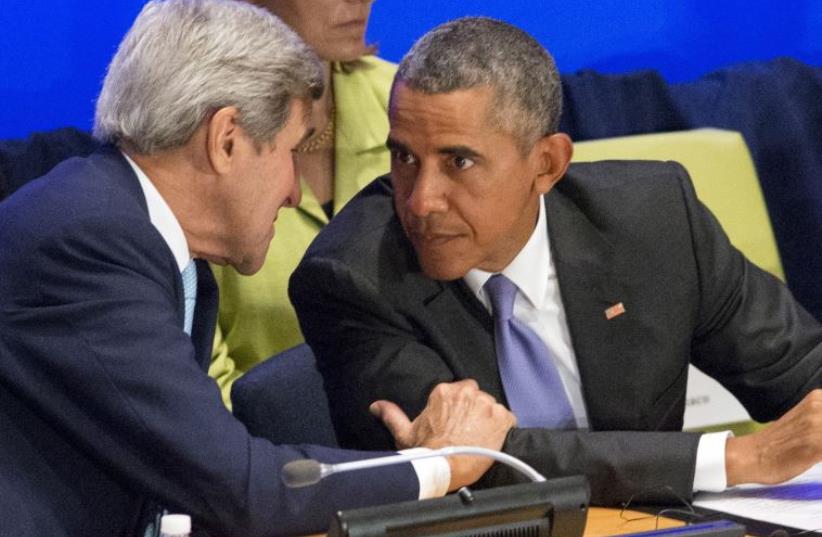 US Secretary of State John Kerry (L) speaks to US President Barack Obama (R) during the Leaders' Summit on Countering ISIL and Violent Extremism at the UNGA September 29, 2015.
(photo credit: REUTERS)
Advertisement
WASHINGTON -- The Obama administration supports the "democratically elected," "civilian government" of Turkish President Tayyip Erdogan, the White House said on Friday night, amid a military coup d'etat against his leadership.
"All parties in Turkey should support the democratically-elected Government of Turkey, show restraint, and avoid any violence or bloodshed," the White House said in a statement, reading out a phone call between US President Barack Obama and Secretary of State John Kerry.
Kerry spoke with Turkey's foreign minister just moments earlier, and Turkey's ambassador to Washington said he also had been actively engaged with the administration before its statement was offered.
At least part of Turkey's military took over key government buildings and state-run television stations, and sent tanks, jets and troops nationwide on Friday night in a massive show of force. Those behind the coup declared a government takeover– ostensibly to restore democracy and the rule of law, although Erdogan claims to represent those very same principles.
"We are monitoring a very fluid situation," Kerry said in a prepared statement. "I spoke this evening to [Turkish] Foreign Minister Cavusoglu and emphasized the United States’ absolute support for Turkey’s democratically-elected, civilian government and democratic institutions."