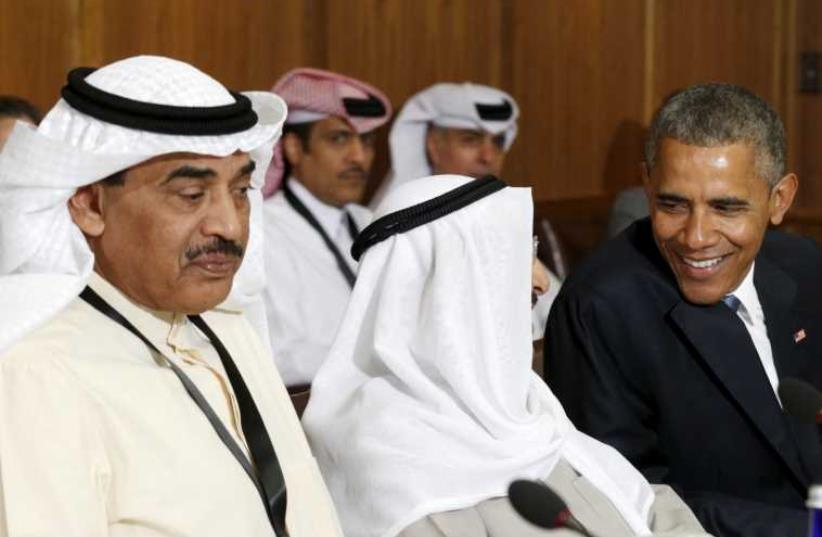 Barak Obama at Camp David
(photo credit: REUTERS)
Advertisement
DUBAI- US President Barack Obama said in remarks broadcast on Friday that Washington would assist Gulf allies facing conventional military threat and also improve their ability to address concerns about destabilizing Iranian actions in region.Speaking to Saudi-owned al-Arabiya television following a summit with Gulf Arab leaders he described as "very frank and honest", he added that Syria's war would "probably not" end before he leaves office, and that Washington could never on its own have brought that conflict to an end.Many Gulf Arab states are critical of what they see as Obama's hesitant approach to the war in Syria, where President Bashar al-Assad is backed by their regional rival Iran.He rebuffed a suggestion by the interviewer that Syria could be his "Rwanda", a referring to the 1994 genocide that came to haunt the then administration of President Bill Clinton."You have a civil war in a country that arises out of a long standing grievance: It was not something triggered by the United States, it was not something that could have been stopped by the United States," Obama said of Syria's conflict.He said the United States had not launched missiles at President Bashar al-Assad in 2013, following a chemical weapons attack widely attributed to Assad's forces, because his government had given up its stocks of chemical weapons.Turning to security in the Gulf, he said the US military would help Gulf Arab states against any conventional armed threat, such as Iraq's 1990 invasion of Kuwait.When it came to non-traditional threats, Washington would work with Gulf Arab states to improve their own special forces, weapons interdiction and intelligence capabilities.He said he was "very frank with the GCC leaders," referring to the six-country Gulf Cooperation Council (GCC): "The United States ultimately can only work through Arab countries who are also working on their own behalf to deal with these issues."He suggested that Gulf Arab and US concerns about non-traditional threats in the region centered on Iran.