The intense pressure appears to have made the outcome of next month's votes on the deal closer than expected as some Democrats are persuaded to break ranks with Obama. 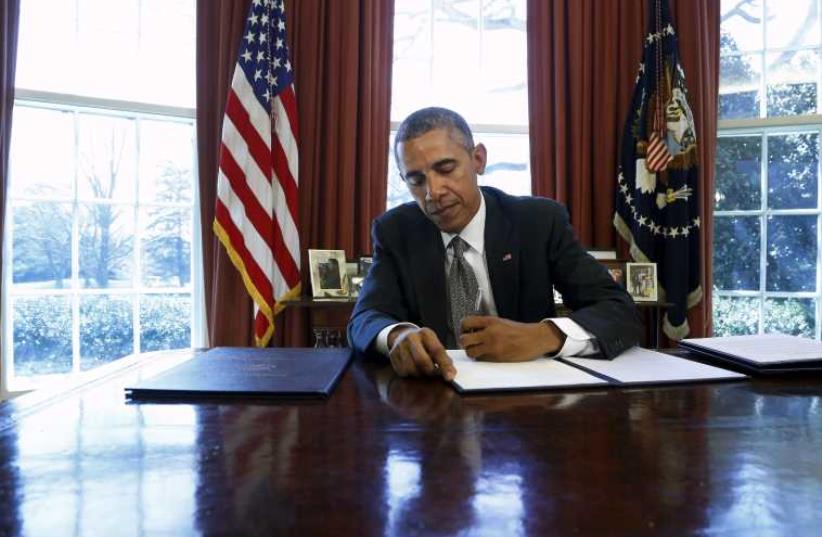 US Presidnet Barack Obama in the Oval Office at the White House [File]
(photo credit: REUTERS)
Advertisement
WASHINGTON - As he weighed whether to support President Barack Obama's nuclear deal with Iran, Representative Donald Norcross was showered with the sort of attention rarely shown to junior members of the US Congress.The New Jersey Democrat, a former labor union leader, met with Obama and other Democrats twice in the White House. He listened to briefings by Secretary of State John Kerry, Energy Secretary Ernest Moniz and senior Defense Department officials.He took an all-expenses-paid trip to Israel, where Prime Minister Benjamin Netanyahu spent two hours with him and 21 other Democratic lawmakers, picking out faults in the agreement that Israel opposes. Voters from Norcross's south New Jersey district flooded his office with phone calls and emails and buttonholed him in person.On Tuesday, Norcross said he would oppose the deal on the grounds that it does not go far enough to prevent Iran from developing a nuclear weapon. All the attempts at persuasion gave him the information he needed to make up his mind, he said, adding that the politics of the debate weren't a factor."People really know at a gut level that if anybody tries to bring politics into it, (that's) way off base," he said in an interview with Reuters.As the minority party, Norcross and his fellow Democrats are often sidelined on Capitol Hill. But over the past month they have been the targets of a multi-million dollar lobbying campaign as they weigh one of the most consequential foreign-policy decisions in years.The intense pressure appears to have made the outcome of next month's votes on the deal closer than expected as some Democrats are persuaded to break ranks with Obama.Congress, where majority Republicans overwhelmingly oppose the deal, is expected to reject the pact next month. But Obama will still be able to save the agreement if he can deny opponents in either house the two-thirds majority needed to override his expected veto.The fate of the deal now hinges on the votes of the 18 Democratic senators and roughly 100 Democratic House members who have yet to say how they will vote.The US-led international agreement reached in July would put new limits on Iran's nuclear program in exchange for lifting crippling economic sanctions on the country.On one side of the lobbying effort are progressive groups who back Obama's view that the deal is the best chance to avoid another Middle East war. On the other side, with a larger war chest, are many Jewish-American groups that say the deal has dangerous loopholes and fear it will empower Iran and ultimately leave Israel vulnerable to nuclear attack.Norcross came out against the deal at a synagogue in his district, where he was joined on stage by an Israeli official and a lobbyist for the American Israel Public Affairs Committee (AIPAC), a powerful pro-Israel group that opposes the pact.Many members of that congregation who normally support Obama oppose him on this issue, according to its leader."This is a chasm that can't be bridged," said Rabbi Ephraim Epstein of Congregation Sons of Israel in Cherry Hill, New Jersey.REPUBLICAN OPPOSITIONWhite House officials privately expect they will be able to round up the 146 votes needed in the House to keep the deal alive, and are cautiously confident about the Senate as well.In the Senate, 26 of the chamber's 44 Democrats have said they support the deal and two have said they will oppose it, according to a Reuters tally.That means opponents of the deal need to win over at least 11 of the 18 senators who remain undecided."I would say we have a fighting chance," said former Democratic Senator Joseph Lieberman, who is making calls while recovering from knee surgery on behalf of Citizens for a Nuclear Free Iran, an interest group that opposes the deal."It's not out of reach, but we're not kidding ourselves," Lieberman told Reuters.Democrats still on the fence face intense public pressure.Lieberman's group, which is funded by AIPAC, plans to spend up to $40 million in its campaign to kill the deal. The group has run TV ads in at least 23 states, according to public filings compiled by the Sunlight Foundation, a watchdog group.It has taken out billboards in New York's Times Square praising Charles Schumer - the Senate's No. 3 Democrat - for opposing the deal and chastising Senator Kirsten Gillibrand for backing it.Another AIPAC affiliate paid for Norcross's trip to Israel earlier this month, which was planned before the deal was complete. Most of the other 21 Democratic House members on the trip have yet to announce their position on the deal.Secure America Now, another advocacy group that opposes the deal, has bought ads on the messaging service Snapchat to sway Maryland Senator Ben Cardin. The group's supporters have generated 2,400 calls to his office and 3,500 calls to his top staffer, according to spokesman Vincent Harris.The group has also used Twitter to target undecided members like New Jersey Senator Cory Booker."I have never had my cell phone blow up and my email account blow up as much as it is now," Booker said on a conference call with Jewish-American groups on Thursday.J Street, a liberal Jewish-American group that backs the deal, is running TV ads in nine states and has enlisted former Israeli security officials to speak to undecided Democrats.CREDO Action, another liberal group that backs the deal, says its members have placed 49,000 phone calls and organized dozens of meetings with lawmakers and staff.Norcross's decision to oppose the deal has given new ammunition to Alex Law, a progressive Democrat who is mounting a long-shot bid to unseat him in the 2016 primary election."He should be supporting our president," Law told Reuters.Norcross said even a personal appeal from the president probably wouldn't have changed his mind."What bit of information that I don't have already could he have brought to light?" he told Reuters.