Observer: 2.5 million Turkish referendum votes could have been manipulated

Turkish President Tayyip Erdogan has dismissed criticisms of the vote. 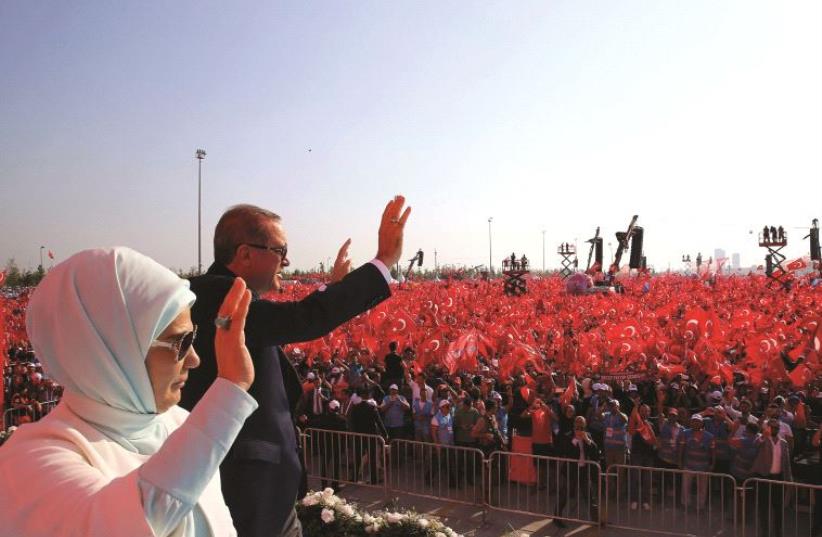 Rassemblement de soutien au président Erdogan, le 7 août 2016
(photo credit: REUTERS)
Advertisement
VIENNA - Up to 2.5 million votes could have been manipulated in Sunday's Turkish referendum which ended in a tight 'Yes' vote for greater presidential powers, Alev Korun, an Austrian member of the Council of Europe observer mission, told ORF radio on Tuesday.
Erdogan"s disputed referendum win (credit: REUTERS)
The mission of observers from the 47-member Council of Europe, the continent's leading human rights body, had already said the referendum was an uneven contest. Support for "Yes" dominated campaign coverage, and the arrests of journalists and closure of media outlets silenced other views, the monitors said.But Korun said there were questions about the actual voting as well."This is about the fact that actually the law only allows official voting envelopes. The highest election authority decided however -- as it were, against the law -- that envelopes without official stamp should be admitted," she said."There is a suspicion that up to 2.5 million votes could have been manipulated, said the Austrian member of parliament, a Green.Korun also said that police in the majority Kurdish town of Diyarbakir hindered two of her colleagues from entering voting locations. She also pointed to videos on social media, which appear to show people voting more than once, although this still had to be proven."These complaints are to be taken very seriously and they are, in any case, of such an extent that they would turn around the outcome of the vote," Korun said.The pro-Kurdish opposition Peoples' Democratic Party said it presented complaints about unstamped ballots affecting 3 million voters, more than twice the margin of President Tayyip Erdogan's victory.Turkish President Tayyip Erdogan has dismissed criticisms of the vote.