The O.U. statement on Thursday came as the US House of Representatives voted 289-137 for a law that would increase the stringency applied existing restrictions on the refugees. 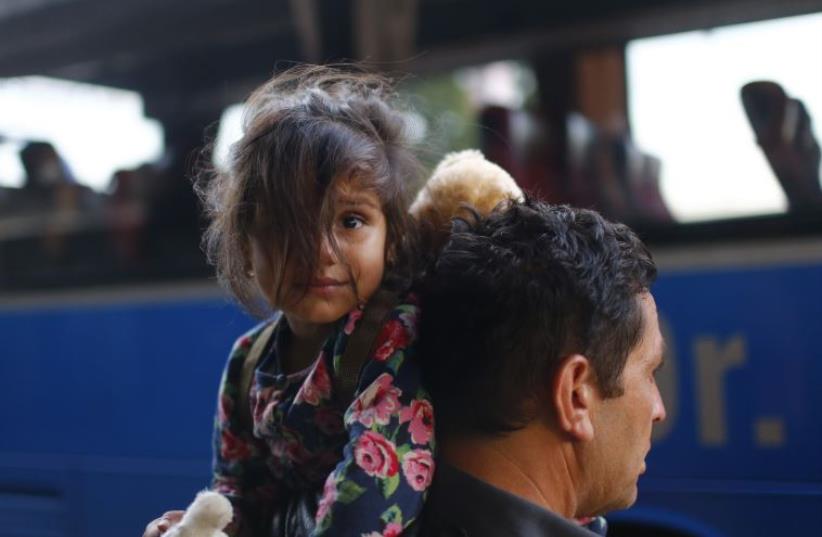 A young girl reacts as migrants board a bus after arriving by train at Schoenefeld railway station, south of Berlin
(photo credit: REUTERS)
Advertisement
The Orthodox Union joined an array of Jewish groups in urging the United States to “get to yes” on admitting Syrian refugees.The O.U. statement on Thursday came as the US House of Representatives voted 289-137 for a law that would increase the stringency applied existing restrictions on the refugees.The Orthodox Union represents the second major stream of Judaism to favor bringing in 10,000 Syrian refugees over the next year, as proposed by the Obama administration. Earlier this week, the Union for Reform Judaism was among 81 organizations, including 11 Jewish groups, that signed a letter urging Congress members to allow the administration’s plan to proceed.In its statement, the O.U. emphasized its understanding of those who ask for strict vetting procedures, encouraging “a sensible process of reviewing and enhancing security,” but said it should not be a pretext for keeping out the refugees.“While security concerns must be paramount, our focus as a nation should be on ‘getting to yes,'” the statement said.Like other Jewish groups, the O.U. invoked the plight of Jewish refugees from Nazi Europe.“Just a few decades ago, refugees from the terror and violence in Hitler’s Europe sought refuge in the United States and were turned away due to suspicions about their nationality,” it said. “In fact, the Jewish immigrants that ultimately came to these shores fully adopted American values and have contributed greatly to the fabric of our great nation of immigrants.”HIAS, the refugee advocacy group that has led Jewish activism on behalf of the Syrian refugees, condemned the House vote.“Today’s vote is particularly baffling when you consider how well the existing process works,” it said in a statement. “Refugees are already more thoroughly vetted and screened than any other visitor to the United States.”The Zionist Organization of America, separately, released a long compilation of arguments against allowing in the refugees, although it stopped short of outright opposing the policy.The ZOA statement rejected claims that the Syrian refugees could be likened to Jewish refugees from Nazi Europe.“Others have said that there is no comparison between ISIS-infiltrated Syrian refugees and past waves of refugees to America, such as the Cuban-American families of [Republican presidential candidates] Ted Cruz and Marco Rubio fleeing from [Fidel] Castro, Jewish-Americans fleeing from the Nazis, Irish-Americans fleeing from famine, and Vietnamese-Americans fleeing the Viet Cong,” it said.There is at least one known case of a Nazi spy attempting to infiltrate the United States as a Jewish refugee. Cuba flooded the United States with released criminals in the 1980 Mariel boatlift. Transplanted gangsters from Ireland created the first organized crime network in the United States.